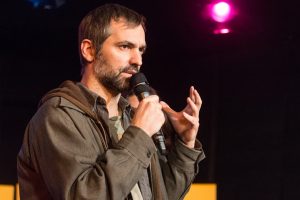 By Kyle Harris | Westword | City officials cutting ties with Open Media Foundation in order to “modernize” cable access did not show up on December 19 for the final broadcast from the OMF studios at 700 Kalamath Street, complete with speeches and a slumber party to mark the end of an era for the nonprofit running cable access in Denver.

Cable access — those non-commercial television stations where everyday people can make and broadcast their own content on cable — was born in the late ’60s and early ’70s, when the Federal Communications Commission forced cable companies to pay municipalities a percentage of their revenue to fund public, educational and government channels in exchange for using public utilities.

Denver first authorized cable-access channels forty years ago, when it signed the first franchise agreements with cable providers. Today these channels are overseen by Denver Marketing and Media Services, which has contracted for the past twelve years with the nonprofit Open Media Foundation and its cable-access arm, Denver Open Media, to operate them.

The higher-ups at Denver Marketing and Media Services missed the chance to speak at the December 19 open mic about their new initiative, Denver Community Media, which is taking over channels 56, 57 and 88. They also missed the opportunity to invite the dozens of community producers, artists and OMF supporters in attendance to visit the new community-access studio that Denver will open in the City and County Building.

The event at Open Media Foundation headquarters was organized by a who’s-who of Denver artists, the very people the city would be wise to collaborate with on its future projects: rapper, disability-rights activist and mayoral candidate Kalyn Heffernan of Wheelchair Sports Camp; Jonny 5 of the Billboard-charting Flobots; and animator and musician Laura Goldhamer. Internationally renowned trumpet player Joshua Trinidad was also in the house, as were members of Chimney Choir, Rubedo, Rare Byrd$ and many more bands.

Media producers, artists and OMF supporters shared space, performed short sets and enjoyed each other’s work, singing along, cheering, doing what communities do. They lavished praise on Open Media Foundation and honored the work of Tony Shawcross, nationally recognized as a savior of cable access in Denver and a pioneer of new technologies who has spent the past year begging Denver officials to reconsider their decision to cut ties with his organization.

They spoke about all they had learned from Ann Theis, a stalwart media activist and producer who runs Denver Open Media, the cable-access arm of the foundation, and has trained thousands of youth and adults alike in studio broadcast, field production, editing technology and more.

Through its cable-access channels, Open Media Foundation has hosted political debates, Democracy Now! broadcasts, coverage of the Democratic National Convention when it came to town in 2008, and First Friday concerts that are a bucket-list gig for rising musicians. OMF has collaborated with countless nonprofits, and last year trained more than 2,000 youth in media production.

At midnight, Denver cut the feed and took over the broadcast on the cable-access channels that the Open Media Foundation had operated. It also pulled the plug on the two studios that the OMF was running; the city is shrinking the operation down to one studio located at 1440 Cherokee Street, on the west side of the City and County Building. In two years, the city plans to open up shop at a new community media center in Arapahoe Square.

Why move now? Denver officials say that they needed to secure the equipment and future of cable access in a permanent home. The OMF was willing to collaborate on that — in fact, it’s planning to move to the same media center — but the city opted not to renew its contract with the group.

So far, the city’s path to that new cable-access future has been bumpy.

# # #
About Kyle Harris:
Kyle Harris quit making documentaries and started writing when he realized that he could tell hundreds of stories in the same amount of time it takes to make one movie. Now, hooked on the written word, he’s Westword’s Culture Editor and writes about music and the arts.

Previous:
MUSIC NOTES: Vintage Voltage Expo to be Held March 31, 2019 at the Denver Mart
Next:
INTERESTING BITS: Get to Know COMBO Board Member Angela Whaley