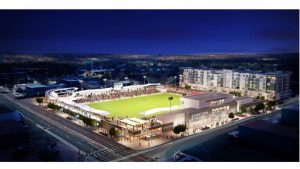 City Council President Richard Skorman, who is a downtown business owner himself, says the new venue will increase the city’s sales tax revenue and attract more people to live near downtown.

“It’s been the dream for a long time and we’re finally getting to that point where it’s starting to really happen,” Skorman said. “All that will really help the economy.”

The stadium is expected to be complete in March 2021. It’s being funded primarily through the Colorado Springs Switchback soccer team and partner Weidner Apartment Homes, a Seattle-based development company. An additional state grant to increase tourism is also filling in the gaps for the project’s budget.

“We won’t be spending taxpayer’s money on this,” Skorman said, wanting to assure Colorado Springs residents.

The outdoor stadium will be built on an empty 5-acre lot southwest of Cimarron and Sahwatch streets downtown.

Bob Cope, the city’s economic development officer, said the venue can accommodate for more than 15,000 people for larger events including concerts and Olympic sporting events. He says the increased tourism will increase business and residential property value.

“If you’re a business owner — especially if you’re into the retail, restaurant or bar business — I think it’s going to be a huge, huge plus,” Cope said.

“There is capacity currently, but we’re also working on expanding capacity,” said Susan Edmondson, the president of Downtown Partnership of Colorado Springs. “Particularly in that node south of Cimarron.”

“These really are setting a vision for what a downtown lifestyle could be,” Edmondson said.