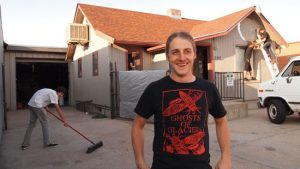 By Bree Davies, Westword | Luke Thinnes is tired of answering reporters’ questions about the struggles of running the DIY venue Rhinoceropolis in Denver in 2019.

That’s three years after the fire at the Ghost Ship warehouse in Oakland killed 36 people at a DIY dance party. Three years after Rhinoceropolis and Glob, adjacent living spaces and venues on Brighton Boulevard, were evicted by the city over safety-code violations. Three years after activists, myself included, worked with Denver city officials at an attempt to improve the fate of artists living on the margins. And nearly two years since my friend, former Rhinoceropolis resident, artist, musician and DIY champion Colin Ward, died by suicide at 27.

In the face of all that, Thinnes — who books shows, runs the soundboard and manages the door at Rhinoceropolis — wants to talk about why he’s still helping to run a venue, not just why it’s hard. Because he doesn’t see it as hard; rather, he finds value in the work he does around art.
> > > > > > > >
Seventh Circle, is located in an industrial section of the Sun Valley neighborhood off Federal Boulevard. It has operated aboveground since it inherited the garage space formerly known as Blast-O-Mat in 2012. The venue shares a DIY ethos with Rhinoceropolis, booking bands playing across a variety of genres. While collective members were put on alert after the Ghost Ship fire and the closure of Rhinoceropolis, the venue remained open after city inspectors visited. The space had correct permitting that had been secured when it was still called Blast-O-Mat, and the venue — under the guidance of sound person and DIY champion Aaron Saye — was code-compliant.