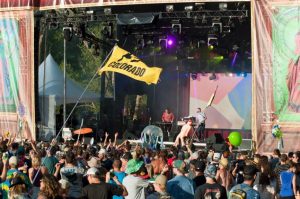 A band performs at the Vertex music festival in Buena Vista. [Jeff Jones, Special to The Denver Post]

Neighbors still mad even after county imposes earlier shut-down times, noise restrictions and a one-year approval — rather than three

The conditions — a one-year permit extension, not the requested three, ending the music earlier and limiting noise to 85 decibels — could kill the festival, festival director Michael Sampliner warned the commissioners.

Boulder’s Madison House Presents wanted a three-year extension for a festival drawing 12,000 attendees — with a cap of 20,000 tickets. Madison House has potential musicians ready to play the festival, but those musicians need confirmation on Tuesday, Sampliner said.

“Beyond this date, we are no longer able to successfully organize this festival,” Sampliner said during a marathon commissioners meeting where dozens of supporters and opponents clashed. “Pushing forward this decision … would be the same as saying no to us.”

A Madison House spokeswoman said the company — and its parent AEG Live — would have an official statement addressing the commissioner’s decision and the future of the Vertex festival in the coming days.

Madison House’s permit request had split the community, with vocal opponents blasting the festival for its noise and traffic, and drug use by attendees.

The nearly five-hour meeting highlighted the creeping antagonism across Colorado between the growing number of new-school residents of rural Colorado who are pushing for broader tourist-based economies and longtime residents who are reticent about swift change.

“So far what has been accomplished is bringing the animosity between the old and the new to the surface,” said Morgan Mahala, a third-generation Buena Vista resident and artist who shared a vendor booth at the festival. “The relentless arguing and name calling is not Buena Vista. To move forward we have to put selfishness aside.”

Many opponents of the festival — which drew a young crowd with its mix of electronic dance headliners — spoke of drug use at the festival. One resident suggested the recent discovery of heroin in the town could be traced back to the festival.

McGuire said his officers made “three or four” arrests at the festival and urged organizers to develop a better evacuation plan. “If there was an incident anywhere in the venue we had to push our way through thousands of people to get in there.”

County staff recommended the concert organizer overhaul its emergency response plan and staff a doctor full-time in the medical tent.

“The medical team was significantly understaffed,” said Josh Hadley, Chaffee County’s paramedics and EMS manager, noting that his teams were significantly more burdened than during Mumford & Sons’ 2015 “Gentlemen of the Road” concert in Salida.

Ed Hansford, a dentist in Buena Vista for 31 years, said he didn’t have trouble with the noise.

“The real issue is much greater than that. It’s about encouraging thousands of people to come here. I say be careful what you ask because you just may get it. I’m not naive enough to think you can stop growth, but you can certainly direct it. We have been discovered,” said Hansford, who also quoted an Eagles song. “Call some place paradise, kiss it goodbye.”

Sampliner said he was ready to rearrange stage positions, stack hay bales to muffle sound and use other sound-absorbing strategies to keep excessive noise from bothering neighbors. But he couldn’t work with a proposal to lower the festival’s decibel levels. He also said it wasn’t plausible to end the concert before 1 a.m. on Friday and Saturday nights.

“The idea is that if we end too early we will be giving an opportunity to reignite the party in the town of Buena Vista and I think that would be a bad situation for the neighborhoods between the venue and the town,” Sampliner said. “The audience is going to demand a full level of entertainment into the night, and if we don’t provide that, they won’t buy our ticket.”

Still, the commissioners required that Madison House shut down music at 12:30 a.m. on Friday and Saturday and 10:30 p.m. on Sunday.

Sampliner, in his presentation to the board outlining his application, unfurled a map of the concert venue from several years ago; a map showing roads winding through several hundred homes a previous landowner had proposed in 2008.

The Selby family that acquired the ranch out of foreclosure in 2014 is developing the South Main community on the other side of town. They bought the 274-acre ranch with hopes of preserving the ranch. They enlisted Madison House Presents to develop a music venue at the site, which would allow them to retain agricultural use of the property.

“The Selbys are real estate developers,” Sampliner said. “They need to do something with this land as we move on. A few hours of music is a reasonably good trade-off to have this meadow protected.”

Jed Selby said he didn’t want development to sound like a threat.

“But the reality is, it’s a very valuable piece of property and this festival at this scale has the potential in the long run … to carry that property,” he said.

A steady stream of supporters — decked out in fluorescent “This is our time to dance” T-shirts — praised Vertex. One resident urged the commissioners to not set a precedent by rejecting events that can help a town develop.

Travis Hochard, the manager of River Runners rafting outfit, said his company was 30 percent busier over the Vertex weekend compared to the same weekend the previous year and he was able to keep his staff working deeper into August.

Steven Taylor, who lives in the Ivy League neighborhood bordering the venue, submitted a letter of support from all of his community’s residents. Many of his neighbors went to the festival.

“We had one of the best times,” Taylor said, and I hope it wasn’t a once-in-a-lifetime thing.”

Another local businessman read a letter sent by Gov. John Hickenlooper expressing his support for the festival and his desire to see Buena Vista added to Colorado’s stable of festival venues like Telluride Town Park and Red Rocks.

“Creating the space and opportunity to expand on this list is important for our statewide music culture to continue growing,” read the Oct. 19 letter from the governor. “The possibility of Vertex at the Cottonwood Meadows joining that venerable list in the future is exciting and worth pursuing.”

Alex Diamond said two days a year of a music festival marks an opportunity for economic vibrancy in his hometown.

“We need to embrace economic change,” said Diamond, noting that the community’s prison, ranching and mining economic engines are evolving. “You don’t always recognize change when it happens.”

Chaffee County’s three-member governing board includes two commissioners — Dennis Giese and Dave Potts — who are leaving office in January. Along with commissioner Frank Holman, they agreed to not approve the three-year permit request, allowing incoming commissioners a chance to consider the festival.

The three discussed lowering the accepted decibel levels for the concert from what was allowed this year, and suggested appointing a committee of sound experts to vet the board’s recommended sound cap of 85 decibels at the property boundary.

The festival’s music never went over the allowed limits this year, which was set at 105 decibels, but festival neighbors spoke of tremendous bass rattling their homes and disturbing their sleep.

Sampliner said lowering the level to a proposed 85 decibels was “untenable.”

“It’s a level at which you’d feel like you were in a living room as opposed to a concert experience,” said Sampliner, adding he would struggle to secure music acts with a cap on sound.

Selby pleaded with the board to keep the concert rolling until 1 a.m.

“We know the water we are standing in. We know these issues and we take them very seriously,” Selby said. “This is less of a permit than we received last year.”

Sampliner said the noise reduction was especially troubling and asked the commissioners for 24 hours to either accept the conditions or walk away from the festival.

“We are on a tightrope,” Sampliner said.

Jason Blevins covers tourism, mountain business, skiing and outdoor adventure sports for both the business and sports sections at The Denver Post, which he joined in 1997. He skis, pedals, paddles and occasionally boogies in the hills and is just as inspired by the lively entrepreneurial spirit that permeates Colorado’s high country communities as he is by the views.
Follow Jason Blevins @jasonblevins