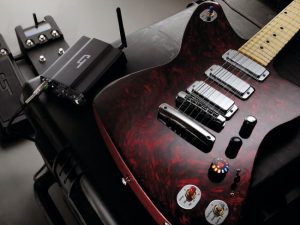 The Firebird X in all its pre-trampled 2011 glory (Image credit: Future)

By Jonathan Horsley (Total Guitar, Guitarist) | US company says instruments were “unsalvageable” and could not be donated – With its arcane switching system, robot tuners, Bluetooth accessories and clunky software, the Gibson Firebird X is a nigh-on impossible electric guitar to love. But for many guitar geeks, the video footage posted on YouTube of hundreds of these instruments being pulverised under the caterpillar tread of a heavy construction vehicle had a uniquely macabre quality.

The video was posted by a former Gibson employee, BJ Wilkes, who explained to YouTuber The Guitologist that the guitars were unsellable and that the company needed to get them off the books as the new owners looked to change the company’s fortunes after its well-publicised financial problems and former CEO Henry Juszkiewicz’s ousting.

Addressing the concerns of those who asked why the guitars were not donated, or their parts repurposed, Gibson said in an official statement that the video footage was of “an isolated batch of Firebird X models built in 2009-2011 which were unsalvageable and damaged with unsafe components. This isolated group of Firebird X models were unable to be donated for any purpose and were destroyed accordingly.”

Gibson’s statement continued with a reaffirmation of the company’s recently relaunched Gibson Foundation, noting that, since 2002, they have gifted thousands of guitars to charities and schools, with its donations valuing over $30 million.

These charitable endeavours will continue with Gibson donating a guitar a day for the next thousand days. The Gibson Foundation was set-up to support “under-served music education programs, empowering music culture and encouraging the creation of music.” You can donate to the Gibson Foundation here. All donations are invested the initiative’s outreach.

Now, back to the Gibson Firebird X in happier times, when perhaps it could have been a marquee competitor to Line 6’s Variax series. The year is 2011, the video marginally less graphic, as Guitarist’s Simon Bradley resists the urge to get his tractor out of the shed and ground this Firebird X into dust.

Those still sold on the Firebird X as a retrofuturist curio can read more about it here and pick one up on sites such as reverb.com. They still cost a mint!
https://www.musicradar.com/reviews/guitars/gibson-firebird-x-502631