Home Colorado Music-Related BusinessBUSINESS NEWS: Kyle Harris of Westword Reports on The Shaky Future of Denver Arts and Culture Funding | Every June Concert at Red Rocks Has Been Canceled or Postponed

BUSINESS NEWS: Kyle Harris of Westword Reports on The Shaky Future of Denver Arts and Culture Funding | Every June Concert at Red Rocks Has Been Canceled or Postponed

By Kyle Harris, Westword | “It’s a crazy time,” says Gary Steuer, head of the Bonfils-Stanton Foundation, one of the biggest arts and culture funders in Denver. “If you’re in the privileged position of philanthropy and running a private foundation, these are those times when it’s your obligation to step up and figure out: What is the role you can play in helping in this crisis?”

When COVID-19 closures swept Colorado’s cultural scene, government, nonprofit and private-sector funders barely took a breath before pouring resources into relief efforts, tapping into sources that had been earmarked for other projects and future plans. Artists — many of whom live paycheck to paycheck, and plenty of whom were given a double whammy when their supplemental jobs in the service industry were eliminated as restaurants and bars shut down — had bills to pay, even if their gallery shows, commissions, concerts or performances were canceled. The situation was dire, and it required urgent action.

RedLine Contemporary used money from its Insite Fund through the Andy Warhol Foundation to create an emergency grant fund; Denver Arts & Venues, the city’s cultural agency, contributed, as did Colorado Creative Industries, the state’s arts organization. All three worked together to form the Colorado Artist Relief Fund, which RedLine administers. More than 670 desperate and anxious people working in the arts and culture sector applied for grants that max out at $1,000; given the size of the fund at the end of the first week of May, no more than 225 artists would be awarded grants.
> > > > > > > >
But within days of the shutdown, in an effort to help 43 nonprofit grantees it had funded over the previous eighteen months, Bonfils-Stanton wrote checks of up to $6,000, handing out $125,000 in relief.
> > > > > > > >
Then on May 4, the Bonfils-Stanton Foundation announced that it had organized the COVID-19 Arts & Culture Relief Fund, designed to support small- to mid-sized cultural groups in Colorado, which typically have fewer resources for survival, with $5,000 to $10,000 grants.

Bonfils-Stanton is contributing $1 million to the fund, which will be administered by the Denver Foundation; that organization donated another $50,000. Denver Arts & Venues gave $205,000, the Gates Family Foundation contributed $100,000, and PNC Bank added $10,000. Individuals including Hal and Ann Logan and Jeremy and Susan Shamos also donated, and the group is still looking for additional contributions.
> > > > > > > >
Go here to read the whole article with other places to go for help:
https://www.westword.com/arts/denver-arts-and-culture-funders-face-challenges-during-coronavirus-pandemic-11707782

Every June Concert at Red Rocks Has Been Canceled or Postponed

By Kyle Harris, Westword | The Red Rocks spring season 2020 never happened, and now the summer schedule is looking bleak, too.

Every June concert at Denver’s legendary venue has been canceled or rescheduled, and Red Rocks Park remains closed. Most of the shows that are being postponed have been pushed into 2021.

While many concerts are still on the Red Rocks schedule for July, String Cheese Incident scrapped its three-night stand, and Above & Beyond’s acoustic concert with the Colorado Symphony has also been canceled. 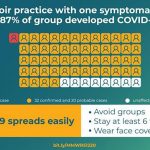 Previous:
REPORTS: How Coronavirus Spread From One Member to 87% of the Singers at a Washington Choir Practice
Next:
BUSINESS NEWS: Open Colorado: Grizzly Rose Owners Express Frustration On Sign Visible From I-25