By Jem Aswad, Variety | Layoffs are coming at AEG Presents, the world’s second-largest live-entertainment company, on Monday (June 8), according to a memo from CEO Jay Marciano obtained by Variety. The extent of the layoffs was unclear at the time of this article’s publication, but they are said to be a combination of layoffs, furloughs and pay cuts that will affect all areas of the company, effective July 1.

The live-entertainment business has been laid flat by the coronavirus pandemic, with no solid timeline for when it might return. Even the most optimistic predictions don’t foresee any traditional concerts returning until late this year at the very soonest, and realistically, it will be at least 18 to 24 months before arena-sized crowds gather.

Live Nation, the world’s largest live-entertainment company, has also tightened its belt in a climate that has seen most companies in this space lose virtually all of their income; CEO Michael Rapino has given up his salary for the year and approximately 20% of the staff has been furloughed. Similarly, multiple agencies have been hit with layoffs and furloughs in the past three months.

In the memo, Marciano references a prior memo from president Dan Beckerman that specifically addressed cutbacks, and he acknowledges how difficult the move is to make during a pandemic and mass protests across the country.

“This has been an incredibly challenging time on so many fronts, and I want you all to know that we are acutely aware of the toll that all of these factors are taking on everyone. There’s never a good time to go through what we are going through as a company, but this is an especially difficult one,” Marciano wrote, mentioning in the next paragraph that the company has delayed the move for as long as it could under the circumstances, and worked to provide “the best safety net we could provide” to the affected staffers.
> > > > > > > > > >
Read the whole, sad story, here:
https://variety.com/2020/music/news/layoffs-aeg-presents-1234627748/ 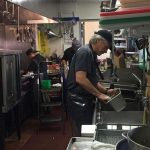 Next:
SONGWRITERS CORNER: Songs for Our Times: A COVID-19 Playlist