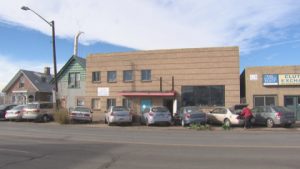 The Rhinocerpolis building on Brighton Boulevard

By Ashley Dean, Denverite | Denver’s own scene has been around since long before the boom, long operating unbothered in the city’s basements and otherwise unneeded warehouses, in some cases housing artists and in all cases acting as safe spaces for young people and incubators for artists who grow into bigger venues locally and nationally. In December 2016, when a fire at Oakland’s Ghost Ship space killed 36 people, that changed. Cities across the country feared their own Ghost Ship fire, and in Denver, inspectors showed up just days later at the doors of venues Rhinoceropolis and Glob to shut down the venues and evict the artists living there.

Two years later, Rhino and Glob have the go-ahead to reopen, but the shape of Denver DIY is different.

But what exactly does it look like? On Feb. 5, we’re going to sit down with RedLine Contemporary Art Center’s Louise Martorano, Glob’s John Golter and Denver Arts & Venues’ Lisa Gedgaudas to talk about it. And before we do that, we’ll watch a movie with our friends at GoodCinema. They’re showing “Goodnight Brooklyn, The Story of Death By Audio,” a film following the final days of the Brooklyn DIY venue after they learned they would be forced out to make way for new Vice Media offices.

Here, for a little optional homework, is a timeline of events:

Dec. 12, 2016
What DIY spaces like Denver’s Rhinoceropolis and Glob do that others don’t — and what their options are now

Dec. 14, 2016
Denver Fire knew in 2015: Records describe Rhinoceropolis as “an abandoned warehouse with people living in it”