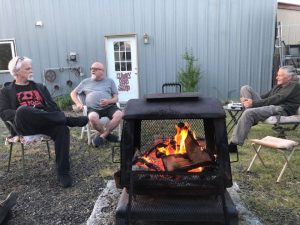 From Jock Bartley on Fb., 5/06/19: Here’s FIREFALL’s David Muse, Sandy Ficca and Mark Andes around the fire outside of Sandy’s studio 5/3/19, after finishing our recording session of a few new songs. We were up in Clear Lake & Medford OR for the benefit concert the following day for Sandy’s non-profit “Use Your Gift” Foundation that takes young kids and senior citizens into his studio to give them a taste of professional recording. Thanks to Sam and Sany for the hospitality and great vibe around the fire.

In an age where new bands come and go, recent inductees into the Colorado Rock and Roll Hall of Fame, Firefall has enjoyed a career that spans more than forty years and shows no sign of slowing down.

Firefall’s commercial success includes three Gold albums, two Platinum albums and eleven chart-topping singles. The band’s biggest hit, “You Are the Woman” has been played on commercial radio more than 7,000,000 times and has also appeared in many movies and television shows. Over the past four decades, Firefall has toured the world and shared stages with other iconic bands such as Fleetwood Mac, The Band, The Beach Boys, Kenny Loggins, Journey, Heart, ELO and Marshall Tucker Band. Currently touring with three original members (Jock Bartley, David Muse, Mark Andes), longtime drummer Sandy Ficca and talented newcomer Gary Jones, Firefall continues to make great music for a loyal following, adding new fans at each show with top forty hits such as “You are the Woman”, “Just Remember I love you”, “Cinderella” and “Strange Way”.

The genealogy and musical roots of FIREFALL run deep into the fertile soil of American rock and folk rock music. It began with the Byrds and Buffalo Springfield. FIREFALL is one of the few surviving bands of this genre and transcends and embraces many industry labels.

Previous:
EVENTS: UMS 2019 Lineup Headlined by Honne, Chicano Batman and Black Mountain
Next:
KUDOS: 7Everyday Hero Lifting the Spirits of Patients Through Piano After HE Has Stroke