Home Colorado Music-Related BusinessBUSINESS NEWS: Manager of Boulder Event Space Fined for Hosting a Gathering of ‘40-50 or more patrons’ and a Noise Violation

BUSINESS NEWS: Manager of Boulder Event Space Fined for Hosting a Gathering of ‘40-50 or more patrons’ and a Noise Violation

By Zach Newman, 9News | The manager of the Riverside, a Boulder event space, was fined $1,000 for violating a public health order after hosting dozens of people at an event with loud music on Sept. 5, according to Boulder County Public Health and court staff at the Boulder Municipal Court.

Body camera footage from three responding Boulder Police Department (BPD) officers obtained by 9Wants to Know briefly shows a crowded backyard filled with people. A thrumming beat can be heard as they approach.

“They’re jammin’,” one unnamed officer said while his body camera was rolling. “It’s packed in there.”

A flurry of movement is visible while the officer looks into the backyard, but a brick wall blocks most of the shot. A second officer goes to look, but his arm blocks the camera.

Richard Moser, the manager at Riverside, said on the tape that patrons were supposed to be wearing masks at the “Mask-erade” event.

“Yeah, I can only do that much,” he said on body camera footage captured by responding officers. 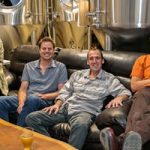 Next:
BUSINESS NEWS: The Show Goes On at the Boulder Theater