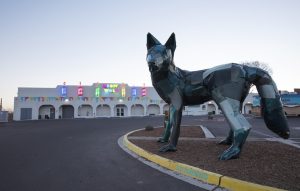 By John Bear, Westword | The director of community outreach for Meow Wolf Denver has filed a claim with the State of New Mexico charging that the Santa Fe-based art collective discriminates against its female and non-binary employees.

Artist/activist Zoë Williams, who identifies as gender non-binary, was hired in 2018 to work on the Denver outpost of Meow Wolf, slated to open in 2021. The complaint, filed August 6 with the New Mexico Department of Workforce Solutions Human Rights Bureau, charges that the company subjects female and non-binary employees to stricter work standards than it does cis-men.

The complaint also accuses Meow Wolf founder and former CEO Vince Kadlubek, who stepped down last month, of discrimination, and claims that at least three other Meow Wolf employees have engaged in discriminatory conduct.

Read the rest of the article here:
https://www.westword.com/arts/meow-wolf-denver-director-files-discrimination-complaint-in-new-mexico-11542888