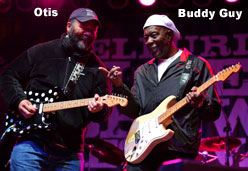 Otis Taylor and Buddy Guy at a previous Trance Festival

The sixth annual Otis Taylor Trance Blues Jam Festival is a day of workshops and an evening performance for musicians and fans of all levels and ages who wish to join renowned artists is an intimate workshop setting.

The event, held Saturday, November 5th at eTown Hall, features workshops between the hours of 10:00 a.m. until 4:00 p.m. and a performance with the Visiting Artists and selected workshop participants at 7:00 p.m.

“The Trance Blues Festival is for musicians of all ages and abilities,” says Taylor. “I am happy to have Mato Nanji and Marcella Simien join with my band and other artists this year.” Others joining will be Cassie Taylor, Anne Harris, Larry Thompson, Todd Edmunds, Brian Juan, Rex Peoples, Andy Sydow and other Visiting Artists to appear at event in Boulder, Colorado. Musicians, educators, singers and fans are invited to participate.

Mato Nanji was raised in a musical family on the Yankton Sioux Reservation where his father, Greg Zephier, Sr., was a well-known spiritual advisor, tribal spokesperson and performer in the band The Vanishing Americans. Mato gain notoriety playing in his own band, Indigenous, since his late teens. He has performed both live and in numerous studio recordings over the years with the Otis Taylor Band. Mato has also been a member of the Experience Hendrix Tour since 2002 were he has performed alongside original Hendrix band members Billy Cox and the late Mitch Mitchell as well as with music greats like Buddy Guy, Chris Layton, Tommy Shannon, Jonny Lang, Kenny Wayne Shepard and Robert Randolph.

Joining the Festival for the first time in 2016 will be Marcella Simien. Originally raised in Louisiana, where she has performed and recorded with her multi-Grammy Award winning father, Terrance Simien, Marcella became a Memphis transplant in 2009 where she has merged her Creole Heritage with Memphis Soul.

“You don’t have to be a professional musician to get involved with the Trance Blues Jam Festival,” says Taylor, a Boulder resident and festival founder. “We would like to see the festival evolve to include artists hosting sessions slanted towards many different styles of music. The more types of participants we have, the better,” Taylor says.

Taylor’s compelling style of path-forging and “trance-blues” sonic landscapes has won praise from The New York Times and National Public Radio (NPR). Otis was honored to be included in the inaugural exhibit at the recently opened Smithsonian National Museum of African American History and Culture in Washington, D.C. While drawing upon elements of early American blues and even earlier African music, Taylor has been called “arguably the most relevant blues artist of our time” by Guitar Player magazine.