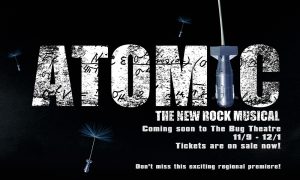 Equinox Theatre Company is thrilled to present the regional premiere of ATOMIC: The New Rock Musical. Performances will be November 9 through December 1 with shows Friday and Saturday nights at 7:30 p.m. There will also be a pay-what-you-can industry night on Thursday, November 29th. Tickets are $20 in advance/$25 at the door/$17 for groups of 6 or more in advance only. All performances will be at The Bug Theatre at 3654 Navajo Street in Denver. Tickets and more information available online at www.EquinoxTheatreDenver.com

About the show: The atom bomb’s creation during WWII was an unprecedented collaboration of minds. America’s brightest academics. Brilliant refugee scientists fleeing the terrors of Europe. Government and military leaders. An army of construction and factory workers with no idea what they were working on. A tossed salad of humanity, united and driven by urgent necessity. Battling the clock, bureaucracy and each other to beat Hitler to the weapon that would decide the war. Only once Germany had surrendered did focus shift to Japanese cities. By then the project had grown too big to stop. But one man did try to stop it. A man since buried by history, but without whose intellect and determination the weapon that could end us might never have had its start. His name is Leo Szilard. His is the story of the bomb we only thought we knew.

“From the moment I heard the first bars of the opening song of Atomic I knew it was going to be a project I wanted to direct,” said Director Patrick Brownson. “The music is so passionate and powerful, not to mention the fact that it just plain rocks. The story also is extremely timely. The little guy trying to fight back against destructive people in high levels of government wielding destructive power they shouldn’t? Totally timely.”

“This new musical does what the best of the genre does so well – revitalize ways of looking at the world.” – Theatre Red

“Compulsively watchable… blows the roof off the theatre” – Theatremania

“Atomic is a deeply satisfying look at American History. The music is terrific.” – Examiner