BUSINESS NEWS: The Underground Music Showcase Will Return in 2018 Under New Management 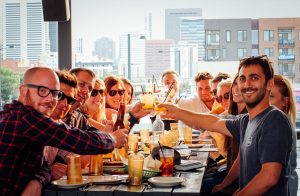 When The Underground Music Showcase (UMS) returns to Denver on July 26-29, it may feel a little different than it has in years past.

That’s because for the first time in the music festival’s 17-year history, The UMS won’t be affiliated with The Denver Post. On Monday, boutique event producer Two Parts purchased the festival from The Denver Post Community Foundation for an undisclosed amount of money.

“It’s huge for us,” said Two Parts founder Casey Berry, 31, who’s been in talks to buy the event for “the past couple of weeks.” “We’re trying to be on the forefront for craft beer, food, spirits and makers in Denver, so we’re super excited to be joining the music scene.”

Two Parts intends to bring the festival back to South Broadway, but has yet to meet with neighborhood businesses or secure a permit from the city. According to a release, the festival will feature “hundreds of bands” — including national acts — and “even more craft beer.”

Two Parts events manager Tobias Krause, who worked as a talent buyer and showcase organizer with The UMS last year, will be the festival director for the event.

“We really love the Denver music scene,” Krause said in a phone interview. “We bring a full team of event organizers and producers that can lend a hand to continue to build on (The UMS’s) foundation. We want to highlight the Mile High City — not only on the music level, but everything else that’s happening here.”

Similar to Austin’s South By Southwest music conference, The UMS is a freewheeling music festival that takes place in several music venues, bars and parking lots around South Broadway. The event’s fate has been uncertain since director Kendall Smith parted ways with the festival in September 2017.

“I am excited to see what Two Parts does with the UMS. Their reputation for executing quality events and their commitment to craft makes them the ideal team to lead the next phase of the festival,” Smith said in a release.

The Denver-based Two Parts organized more than a dozen events in 2017, including craft beer gatherings Collaboration Fest and Sesh Fest. The company has produced concerts as additions to its food and drink festivals. For example, last year’s Truck Stop, a local food truck rally, featured shows by The Guest List, The Other Black and headliner Lee Fields and The Expressions.

Two Parts plans to release details on its lineup in the coming weeks.

Read the rest of the article at the link provided:

By Dylan Owens, The Know
Dylan Owens is co-editor of The Know and music editor of the Denver Post. A former baby model, he spends most of his money on music and club sandwiches.