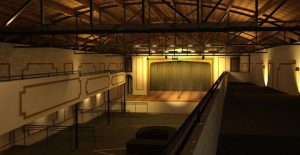 A rendering of the potential remodel of the Yates Theater. (Courtesy of Downtown Property Services)

By Jon Solomon, Westword | Nearly a year after applying for a tavern liquor license and dance cabaret license, the team converting the historic Yates Theater, at West 44th Avenue and Yates Street, into a music venue has finally been approved for both by Denver’s Department of Excise and Licenses.

The road to approval has been long, and residents of the Berkeley neighborhood had been stuck in gridlock over whether the project should go forward. That came to a head on June 13, when neighbors gathered for a six-hour meeting, debating the potential merits and perils of the venue.

“During the hearing, some community members raised concerns about how noise complaints would be handled, while others debated parking issues,” Ben Wiese wrote in Westword. “Still others discussed just how viable a venue could be that would only hold 100 people seated and 600 standing.”

To allay some concerns, Jerri Theil, manager and talent buyer for the Yates Theater, said that she and Ken Wolf, the developer who owns the property, would support resident-only street parking in the surrounding area, similar to what’s in place around the Bluebird Theater, to help mitigate concerns.

To stay in the city’s good graces, the venue must meet four conditions…

Read the rest of the story here:
https://www.westword.com/music/yates-theater-receives-liquor-and-cabaret-licenses-11495823