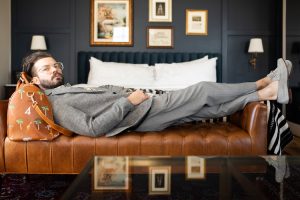 Jeff Cormack working hard on his talk for Balanced Breakfast!

Balanced Breakfast Denver meets every month – meetings are open to anybody that is passionate about the Music Industry. This Month our speaker is Jeff Cormack. Mr. Cormack is a multi-instrumental music producer, who specializes in original music production, composition, sound design, and creating original scores, for advertising, television, film, interactive media, broadcast, and various recording artists. Inspired by his love for retro guitar-pop, he began his career creating lo-fi, garage rock until the indie and film world noticed his unique ability to create dynamic, dreamy, dance-able, melody and guitar-driven indie-pop that is centered around his intertwining vocal parts and lush layers of catchy, reverb-soaked harmonies.

His independently released, debut full-length album was featured on several major music blog’s “Most Anticipated Albums of 2013” lists, and in 2017 his song “Run” lasted 14 days on Spotify’s “top 50 viral tracks” chart (topping some of the worlds biggest artists). This album also landed him print features in Under The Radar magazine, Filter Magazine, and has earned several excellent reviews from numerous influential music critics around the world.

In 2014 Jeff was listed as one of the top ten reasons to visit Denver by Refinery29 Magazine.
Jeff’s music can be heard worldwide and has been featured in Filter Magazine, Under The Radar Magazine, MTV, internationally theatrically released films, festival selected short films, and FM radio. Jeff has personally created custom music and sound for 3 Addy-winning broadcast campaigns, he played a key role in composing 6 pieces of original music for the film “One For The Road” that won the prestigious “Best Soundtrack” award at the 2011 iF3 International Film Festival, and he recently had the honor of speaking at a TEDtalk. The conversation could go many directions in a casual Q & A type atmosphere, this is one not to miss!

[Thank you to Alex Teitz, http://www.femmusic.com, for contributing this.]