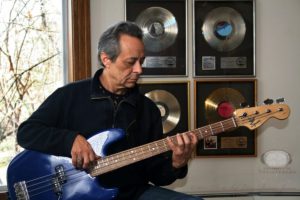 LAST NOTICE: COMBO will be presenting Kenny Passarelli speaking on his long and storied music career and his many years of being a bass player and the adventures between.

Kenny was born in Denver, Colorado. His first instrument was the trumpet. In truth, Kenny may very well have gone on to a career in Classical Trumpet, but a meeting with Stephen Stills changed his life forever. Stills took a liking to Kenny, and played him some tracks that Stills had been working on. Stills then played Kenny a rough version of Carry On, and Kenny was simply blown away.

In the summer of 1971, Kenny got his first big break. He received an invitation from Joe Walsh to join Barnstorm. Kenny recalls that Joe was the person responsible for his getting involved with the fretless. Joe received one of the very first fretless P-Basses, and gave it to Kenny. Kenny worked with some of the best … Russ Kunkel, Joe Vitale, Dan Fogelberg and so many others from that memorable period. Things hit a high point when Kenny co-wrote the classic track Rocky Mountain Way with Joe Walsh.

Kenny’s biggest break came when Joe Walsh recommended him to Elton John, who was in need of a new bassist. Elton flew Kenny to Paris, where he auditioned. Kenny remembers, “I really didn’t know a whole lot of Elton’s music. When I auditioned, it was just the two of us. .. but he was impressed by some of the people that I recorded with.”

The meeting will be hosted by COMBO Board Member and award-winning sound engineer Clark Hagan. We’ll also provide some refreshments but feel free to bring your own coffee!

Come early or plan to stay a few more minutes to check out the Music Store’s wares on the ground floor. Beautifully displayed, the store features all of your favorite instruments and accessories. They also offer clinics in drumming, ukelele, and more as well as full classes in piano, guitar, ukelele, strings and percussion.