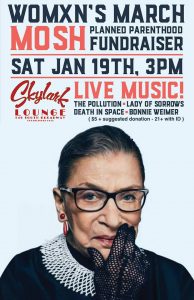 By Kyle Harris | After the Womxn’s March Denver takes to the streets of the Mile High City on Saturday, January 19, bands will be gathering around town to raise money for important causes and celebrate the spirit of protest with music.

The weirdest lineup — and the one that will give you the best view of what’s happening at the fringes of the fringe of Denver’s experimental music scene — will take place at the Skylark Lounge; funds raised at the event will go to Planned Parenthood.

The concert is named Womxn’s March Mosh 3. But despite the name, don’t expect much moshing: This isn’t exactly a punk show. (For that, go to Punks Against Trump).

Independent promoter Claudia Woodman, a treasure in the Denver DIY music scene who brings underground musicians from living room and basement shows into bars citywide, has put together an afternoon of thought-provoking acts — including charming banjoist and songwriter Bonnie Weimer, lo-fi experimental shoegaze act Death in Space, the punk band The Pollution and one of Denver’s newest bands, the haunting Lady of Sorrows.

Joining the musicians will be burlesque performer Siren Sixxxkiller: The Babe with the Power, who’s described as “your friendly neighborhood intersectional feminist bringing you political punk-rock performances in non-traditional spaces.”

For more information, go to the event’s Facebook page.
https://www.facebook.com/events/221785255410071/
Kyle Harris quit making documentaries and started writing when he realized that he could tell hundreds of stories in the same amount of time it takes to make one movie. Now, hooked on the written word, he’s Westword’s Culture Editor and writes about music and the arts.