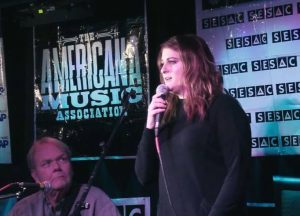 By John Bear, Westword | Durango Songwriters Expo founder Jim Attebery says his yearly conference is a way for artists and songwriters to hone their craft in a non-competitive environment where everyone gets a chance to be heard.

“It’s low-key,” Attebery says. “It’s not like an L.A. or Nashville pitch session, [where] you get in there and they play maybe fifteen seconds of your song. If it’s not happening: ‘Thank you for your time, we’re done.’ That’s not what this is at all. There’s a lot of constructive feedback, and there are lots of songs that will get picked up.”

Attebery says that the expo only takes 200 people, who will be able to work with about forty music-industry professionals. That, he says, makes for a productive few days, and industry folks won’t be running for the door like they might at some of the bigger songwriter conferences in California.

At other events, “none of the industry people want to stick around after the panels,” he says. “You can imagine what happens to them. They get bombarded. Here you are basically bringing the music industry to Denver and creating an opportunity most people don’t get. The advantage is music-industry people are cool and just hang out. It’s like a tribe. You can get your foot in the door.”

The expo begins on October 3 at the Omni Interlocken Hotel in Broomfield. Registered attendees are allowed to submit songs for three separate “listening sessions” in which they have their recorded music played for industry professionals who offer feedback. The expo will also include panels, songwriting workshops, showcases of music by some attendees and professionals, and open mics. The Saturday night concert that wraps up the expo is open to the public and costs $25 at the door.

The event is geared toward people who perform in various genres — everything from hip-hop to country — and people at different stages of professional development, even people who just write songs for fun, Attebery says.

It’s now in its 24th year and has yearly sister events in California, one of which is geared toward music in television and movies. The conference was held in Durango for many years , but Attebery says organizers had to find a new home after the resort they were using became a private golf club. Organizers finally settled on the Denver area because of its vibrant music scene.

The expo has several success stories to tell, including that of Meghan Trainor, whose 2014 debut single “All About That Bass” was certified diamond after selling ten million copies. Trainor met former NRBQ member Al Anderson — who is one of several industry professionals slated to work and perform at this year’s expo — at a past expo, and the meeting eventually led to a deal with Epic Records.

Denver native Olivia Rudeen, a former University of Colorado student, has gone on to see some success in Nashville. She co-wrote a song with country singer Ashley McBryde that appeared on McBryde’s Grammy-nominated album Girl Going Nowhere, and Rudeen has had another song she co-wrote, “As the Crow Flies,” appear on the show Nashville.

Rudeen says she attended five of the expos before she secured a publishing deal. After college, she moved to Nashville, where she is currently working, but she tries to come back to the expo whenever possible. She appreciates the family feel and the fact that it never felt “scammy.”

“The first year I went, I ended up crying in the bathroom because of the feedback I got,” she says. “Not that anyone was particularly cruel, but it’s kind of the first time a lot of people are receiving that direct feedback. But I kept going back and improving.”

Attebery says that this year, he expects to see songwriters from the United Kingdom, Australia, Slovenia and Canada. About 70 percent of the participants come from outside Colorado, but organizers would like to see more artists from the Front Range come out and fill some of the remaining slots. For one, Attebery says, it’s a way for Denver-area musicians to network with each other and meet with industry people without having to go to California or Nashville.

“It’s a chance to develop relationships for co-writing and find people to work with locally,” he says. “There are also local producers who will be here.”

Owen Kortz heads up the singer-songwriter program at the University of Colorado Denver and became involved with the expo several years ago through Rudeen, who was one of his students. Kortz says that he takes his students to Nashville and L.A. about once a semester, so the expo is also an excellent way for him to connect with people ahead of those trips.

“Unless you read their bios, you don’t really know who they are,” he says. “They are people who are usually more behind the scenes, but they hold tremendous sway. You are presenting your songs and having these people listen to them.”

The showcase events, he says, can be full of similar surprises.

“One year we had the guy who wrote ‘Wind Beneath My Wings’ on the stage,” he says. “And there are people who will start singing this Lady Gaga song you know and love, and you realize they wrote it. You’re like, ‘Wait a minute — I thought Lady Gaga wrote that.’ It’s like, ‘No, it was that guy.’”

Read the rest of the story here:
https://www.westword.com/music/durango-songwriters-expo-comes-to-broomfield-in-2019-11491165

The Durango Songwriters Expo runs October 3 to 5 at the Omni Interlocken Resort, 500 Interlocken Boulevard in Broomfield. Registration is $335. For more information on how to register, visit durango-songwriters-expo.com.