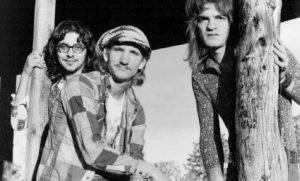 From Michael Martin Murphy on Fb, 8/05/17: My song ” Carolina in the Pines” was originally released today’s date, August 4th, 1975! It was originally recorded for my Epic Records album release, BLUE SKY NIGHT THUNDER- which contained my signature song “Wildfire”-
at Caribou Ranch, Nederland, CO. The music recorded at Caribou Ranch Studios and its owner, Jim Guercio, are being honored at a performance I’m doing at Fiddler’s Green in August 13, for the Colorado Music Hall of Fame with Garth Brooks, Amy Grant, Vince Gill, Joe Walsh, Nitty Gritty Dirt Band and the Lumineers. The show is also a tribute to Dan Fogleberg, who is also being inducted into the Colorado Music Hall of Fame.

Here’s a live performance of version of “Carolina in the Pines” I did with my 1980s compadres of the Rio Grande Band on TNN. That’s David Hoffner on keyboards, the best keyboard player I’d worked with since Jac Murphy, who played on the original track. Sadly, Jac passed away in the late 1970s. David Hoffner has retired from the road, but Chris Wills, Professor of Music at Biola University is now doing a great job playing the tune with me out on the road- when he’s not teaching ! It’s not easy to find a pianist who can play like Jac Murphy ! Jac Murphy, who had flying fingers and quick-witted improvisation was like “Bill Evans meets Bluegrass.” But David Hoffner and Chris Wills are carrying on Jac’s unique style of playing!

By the way, every note of my banjo solo on the TNN performance was arranged for me by John McEuen of the Nitty Gritty Dirt Band.

Editor’s note: Nestled in the foothills outside Boulder, Caribou Ranch was once a creative haven for rock superstars — Elton John, Chicago and Joe Walsh, just to name a few. This month, the ranch will be inducted into the Colorado Music Hall of Fame, along with Walsh and his band, Barnstorm. In the meantime, here’s a listen back to a Colorado Matters conversation about the ranch’s history. This story first aired Jan. 21, 2015.

For Chicago, Frank Zappa, Michael Jackson and more than 100 other bands and artists, Caribou Ranch was more than a place to record classic hits.

It was the frustration of producing “Spinning Wheel” that led Jim Guercio to Colorado. While finishing up work on the song by Blood, Sweat & Tears, an engineer hit the record button, erasing parts of the song’s master tape. Guercio was forced to improvise, creatively filling a blank space in the song with whimsical notes. Though the 1969 song won a Grammy for best instrumental arrangement, Guercio had had enough of irritating experiences in recording studios.

So he went on to build his own near Nederland in the foothills west of Boulder. Guercio dubbed it Caribou Ranch, and throughout the ’70s and early ’80s, the studio was a magnet for greats. Among the artists and visitors: Elton John, Chicago, Joe Walsh, Stephen Stills, John Lennon, Billy Joel, Waylon Jennings, Amy Grant, Michael Jackson and many others.

It all came to an end in 1985 when the studio’s control room was destroyed in a fire. Last year, the ranch was finally sold. Now hundreds of items from the studio and the surrounding cabins where musicians stayed are being auctioned off. Among the items are a Gibson Thunderbird bass guitar often used by Terry Kath of Chicago, original album art, a piano that both Elton John and Michael Jackson played on, and loads and loads of ranch furniture.
> > > > > > > > > >

From Colorado Public Radio: Stories like this are made possible with the support from listeners and readers like you. Ninety-five percent of CPR’s operating budget is derived locally right here in Colorado. Support impartial journalism, music exploration and discovery with your monthly gift today.