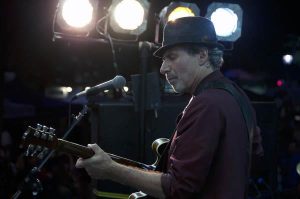 Steve Glotzer – another Colorado musician with lots of credits!

Steve Glotzer has been performing his unique blend of latin, jazz and blues around the country at clubs, festivals and concerts for over thirty years. Often compared to Ottmar Liebert, and described as “Wes Montgomery meets Bruce Cockburn”, he has opened shows for a wide range of artists such as Delbert McClinton, Blues Traveler, Dr. John, Larry Coryell, David Grisman, Son Seals, David Wilcox, Sonia Dada Roger McGuinn, John Cowen, and Richard Elliott, just to name a few.

Steve has released six CDs; Acoustically Speaking, A Softer Side, Memory of One, Lately, Acoustic Christmas, and Life Imitates Art. His music has been featured in movies and TV, on such shows as Diane Sawyers’s Documentary “Children of the Mountain”, Knight Rider, Young and the Restless, Oprah, Desperate Housewives, Wife Swap, ED, One Life To Live, Passions, King of the Hill, Martha Stewart Living, The Weather Channel, the Bachelor/Bachelorette, Sony’s Friends with Money, and the MGM movie A Guy Thing.

● Winner of Jazz Artist of the Year, http://www.Airplaydirect.com

Thanks for sharing your music… ~ Juergen Kramer, Radio ZuSa Germany

“Having over twenty five years in the guitar biz, Steve Glotzer is fully qualified to produce a must have album for music aficionados of surreal bebop, breezy sambas, conga driven wanderlust and sophisticated urban blues.” ~ Roger Gillies, KGNU

“Of all the CDs that have been presented to me over the years “Life Imitates art” is by far on top of the heap. The ten tunes exhibit a warm sweet tone, yet with plenty of tension. Steve has managed to achieve an extraordinary blend in the musicians that he has surrounded himself with.” ~ Michelle Mobley, Sugardaddy Jazz and Blues News

Additionally –
– I also perform with Soul Sacrifice, A Tribute to Santana

“With great passion and precision, Soul Sacrifice faithfully recreates the music of the legendary band Santana. Featuring burning renditions of Latin-infused rock classics such as Oye Como Va, Black Magic Woman, Jingo and Soul Sacrifice; plus breathtaking delivery of guitar ballads
including Europa and Samba Pa Ti, Soul Sacrifice captures and delivers up the signature multi-cultural sound and spirit that is Santana.”

Previous:
NEWS NOTES: Rich Dicker Establishes Scholarship Fund in Memory of His Mother & Collin Baker
Next:
BUSINESS NEWS: The People’s Fair Has a New Behind-the-Scenes Team. How Will it Affect the Longtime Civic Center Event?