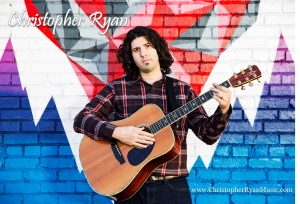 Christopher Ryan is a singer-songwriter who creates music rooted in experience. He was born in New York, grew up in Georgia and attended college in the foothills of the Appalachian Mountains. As soon as he could, Christopher began traveling throughout the American West. Christopher’s music draws on influences from the places he visits, rolling regional sounds into his own brand of obscuracana folk-rock. Today he calls Colorado home.

As a multi-instrumentalist Christopher Ryan brings a lot to the stage, creating unique soundscapes for his audience. He pairs the backwoods infused sound of his three string cigar box guitar with the driving rhythm of a kick drum. He performs songs accompanying his voice with only a hand drum. And yes, he croons out ballads accompanied by his six string guitar and a nightingale like whistle. Regardless of the instrumentation, the lyrics and the performance of his songs contain an authenticity that demands to be heard.

Christopher’s music has been played on more than 40 radio stations in 10 countries. He has performed for the Rocky Mountain Loopfest, the international One Month Festival and been a featured artist on the HooDoo Music podcast and the Mike Kara Radio show. In 2019 he was interviewed for the internationally syndicated Beth Williams Indie Americana Radio Show.

You can find out more about Christopher’s music at http://www.ChristopherRyanMusic.com