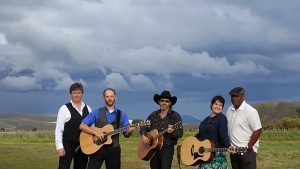 Denver, CO — Colorado band Slopeside is excited to announce their fourth full length album, Shoot The Moon, to be released this June, featuring 10 new songs about life as musicians in the west. Recorded at Coupe Studios and Cinder Sound in Boulder and Gunbarrel, Colorado and produced by John McVey, the arc of the songs are a range of moody ballads to rhythmic odes to life, love and memories with a “relaxing on the back porch at sunset” feel.

“We love crafting songs that echo our own lives as we grow and travel together,” said lead singer, Karen Current, who has performed with her husband Arn and guitar/keyboardist Cody Culver since 2005. Drummer Norris Jones joined in 2008 and Jeremiah Donahue rounded out the rhythm section in 2016. “We write songs we would want to listen to and hope others do too. Sometimes they take new directions in the studio and something you thought was going to be bold and bright becomes soft or delicate – we go where the song takes us.”

At their CD release party on Saturday June 9th at 6pm, the group will be taking over the Colorado Sound warehouse to record a video for Sentimental Revolution with a live concert to follow. Prove Me Wrong is gaining momentum as a lyrical ballad to be featured on the KBCO BolderBoulder compilation CD. The upbeat Saratoga has been a few years in the making with each trip to the southern Wyoming community inspiring a new verse; it is a tribute to small town life in the mountain west that leans a little more toward country than audiences have heard from the band in the past.

“So much of my musical influence comes from my experience as a cowboy for ten years in rural Boulder County, skiing, adventuring and growing up in these beautiful, harsh climates that inspire me,” said lead singer and guitarist Arn Current. “We’re raising kids, juggling day jobs, rehearsing, performing all summer. I think you hear a lot of the struggle and the joy from that in our lyrics this go around.”

In addition to digital streaming, the album presale starts June 1st and copies of the CD and other merchandise will be available for sale throughout the summer. The group launched a series last year called Fireside that has raised thousands of dollars for nonprofit organizations through house concerts and backyard fundraisers. This summer, they will continue to raise awareness and money for Cystic Fibrosis research, the Sarcoma Foundation and several others.

Previous:
TALENT NEEDED: Update: Rare Opportunity: John Macy’s Friends Ready to Record With YOU!
Next:
NEWS: The Voice Recap: Here Are Your Final 4