Home In MemoriamIN MEMORIAM: All Around Musician Will Luckey Dies

IN MEMORIAM: All Around Musician Will Luckey Dies 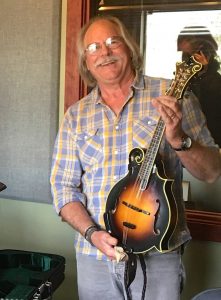 Will Luckey (provided by Chris Daniels)

Chris Daniels, FB, 8/18/19: The world lost one of the most gentle, loving, positive musical souls today. Will Luckey, a father, husband, son, brother, grandfather, songwriter, guitar, piano, mandolin player and founding member of Magic Music died of complications due to his battle with cancer. In the end he was surrounded by the love he made, the family who loved him, the friends who adored him and the music he brought to the world. Will was more than just my best friend; he gave us all our names. It was one of his most endearing traits. Those who know me, know that I was “Spoons,” and Will gave me that name because I played them. And we lived some or all of our lives with a new name and a new freedom that Wilbur gave us. Spoons, Tode, Flatbush, Puna, Cemoto, Sloth, Spike, Das, CW, Bart, Mr. T, Mr. Sink – like characters in a children’s book, Mr. Will seemed to find a core aspect of our character and the name became a companion – a freedom – to be exactly who you imagined you could actually be.

Like a flight instructor, Will gave so many of us our wings. And that was only a tiny part of the joy William Councilman Luckey brought to the world. His songs, Bring The Morning Down, Mole’s Stumble, Eldorado Canyon and The Porcupine Flats Shuffle were not only great musical ideas, they were lyrical romps – a dance of joy and self-reflection. “There comes a day in each man’s own time, when his head fills with empty things, and rhythm and rhyme. The lord looks on and he doesn’t say a thing. He knows I’ll bring a time when all I can do is smile and sing… and bring the morning down pretty mama yeah draw it all around.”

I play music because I met Will Luckey. He gave me my wings…told me I could do it … asked me to meet him on the East Coast to play music with him … so I did. In 1970 I dropped out of school and joined the circus. I spent 6 years in and around Magic Music … and never looked back. If you believe in that sort of thing, Will has new wings (I do) – I can imagine him in some place of peace and music … making music. The world will go on. But the world is a better place because he was here.

You can see a little of that in a documentary that the co-creator of Two and a Half Men and the Big Bang Theory made about Magic Music. It’s on iTunes and Amazon Prime, called “40 Years in the Making: The Magic Music Movie.” It’s a little part of the joyous spirit of Will captured forever on film. But it can never capture all of what he is and was. Fair well my dear brother. You are no longer suffering…. I believe in a better place … and the love you created and left here for all of us will live on, I wish I could find the words to tell you all what a blessing he was to me … and he would say … make the most of every day, Will did. Thanks for all the love Willie… big hugs and love. Spoons