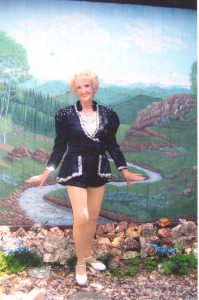 Jeanne Froman in one of her America’s Got Talent costumes standing in front of the mural she painted on her garage (photo by Julie Mascilli).

Taking on the French feminine spelling of “Jean” in elementary school, Jeanne took up tap dancing in elementary school, being awed by the dancing talents of The Nicholas Brothers, Ann Miller, Eleanor Powell, Fred Astaire and Gene Kelly that she saw in the movies of the late 1930s and 1940s. She also loved Shirley Temple and learned to smile from her!

In high school, she drew illustrations for the high school newspaper. She was an extremely talented artist preferring to paint in vibrant water colors rather than pastel colors. She was in choir and also played drums in the band. She was the first female Drum Major in the southern area of Washington, and was an accomplished baton twirler but tap dancing was her first love.

Her dad left the family when Jeanne was 8 years old so, from an early age, she earned money to help her single mom out with family expenses by teaching dancing, sewing and altering clothing for wealthy people, and working as a waitress. She also designed and sewed costumes for her dance students and her grandchildren.

She was the mother of Barb Dye, Jerry Koller, Douglas Froman, Dennis Froman, and Julie Mascilli. The family resided from 1954 to 1975 in Thornton. She eventually moved to San Antonio to live with her daughter Julie.

She started Jeanne’s School of Dance in Commerce City and moved it to Thornton when the family moved there. Through the years she taught hundreds of students with Julie assisting her in the role of teaching tap, acrobatics, ballet and jazz styles of dance. Jeanne and Julie ran the Miss Thornton Pageant (associated with the Miss Colorado/Miss America Pageants) for three years.

In 2008 at the age of 85, she auditioned for America’s Got Talent, wowing the judges by performing a fast tap routine while jumping rope. Although she did not get on the final shows, she did get through the 4th round and was featured in the AGT commercial throwing a kiss at judge Piers Morgan! She had a great time, and it was her dream to be able to tap with Nigel Lythgoe, an executive producer of AGT and judge of So You Think You Can Dance, although that didn’t happen.

Diagnosed with congenital heart failure in 2011, she had an experimental stent implanted in 2016 at the Methodist Hospital in San Antonio which helped to extend her life for more than 3 more years. For this, she was honored at a special ceremony in San Antonio with the San Antonio Spurs Cheerleaders and the Spurs mascot in 2018 for her 95th birthday. She continued to tap dance up until the very end, and her daughter posted a video of her doing ballet stretches two days before she died. Jeanne really believed that staying active and exercising helps to prolong your life.

Jeanne was a multi-talented woman who won many awards and accolades during her life and was much loved by the people she met. She joins all of her siblings and other family members in the hereafter, and is survived by her children, 7 grandchildren, and 9 great-grandchildren.

Photo: Jeanne Froman in one of her America’s Got Talent costumes standing in front of the mural she painted on her garage (photo by Julie Mascilli).

David Louis Bartholomew (December 24, 1918 – June 23, 2019) was an American musician, bandleader, composer, arranger and record producer. He was prominent in the music of New Orleans throughout the second half of the 20th century. Originally a trumpeter, he was active in many musical genres, including rhythm and blues, big band, swing music, rock and roll, New Orleans jazz and Dixieland. In his induction into the Rock and Roll Hall of Fame, he was cited as a key figure in the transition from jump blues and swing to R&B and as “one of the Crescent City’s greatest musicians and a true pioneer in the rock and roll revolution.”

Many musicians have recorded Bartholomew’s songs, but his partnership with Fats Domino produced some of his greatest successes. In the mid-1950s they wrote more than forty hits for Imperial Records, including the Billboard number one pop chart hit “Ain’t That a Shame”. Bartholomew’s other hit songs as a composer included “I Hear You Knocking”, “Blue Monday”, “I’m Walkin'”, “My Ding-A-Ling”, and “One Night”. He was a member of the Songwriters Hall of Fame, the Rock and Roll Hall of Fame and the Louisiana Music Hall of Fame.

Elliot Roberts (born Elliot Rabinowitz, February 25, 1943 – June 21, 2019) was an American music manager and record executive, best known for helping to start and develop the careers of singer-songwriters from the late 1960s and 1970s, including those of Neil Young – whom he managed for over fifty years – and Joni Mitchell.

He was born and grew up in The Bronx, New York City, to a Jewish family who fled Nazi persecution. After graduating from high school and dropping out of two colleges, Roberts attempted a career in acting before going to work for the William Morris Agency where he met David Geffen, an agent at the firm. He became the manager of Joni Mitchell after hearing a tape provided by Buffy Sainte-Marie, and seeing Mitchell perform in New York. They both soon moved to Laurel Canyon in California. After the band Buffalo Springfield split up in 1968, Mitchell persuaded him to manage the career of fellow Canadian Neil Young. He later also managed Crosby, Stills and Nash, America, and others. Roberts formed the Geffen-Roberts Company with Geffen, and helped Geffen to create Asylum Records in 1970, which merged with Elektra Records in 1972 to form Elektra/Asylum Records. After splitting with Geffen, Roberts set up Lookout Management.

Roberts was Joni Mitchell’s manager until 1985, and remained Neil Young’s manager until his death. Young called him “the greatest manager of all time”, and in his autobiography wrote of him: “Because I tend to avoid the confrontations and delivering bad news, I am not good at doing any of that… Elliot is. He knows how to communicate where I don’t … Just as I wake up every day with a new idea, he wakes up every day with a new approach to solving the problems that arise with the projects I am already immersed in. There are a lot of them. This is our pattern.” Roberts himself said: “I think I’m tough… Have you ever met a guy in my position who thought he was a pussy? I’m tough, but I’m fair… No, I think I’m way tough, and I don’t think I’m fair at all. Fairness comes into the equation sometimes, but when I deal with Neil for Neil, I don’t care what’s fair — I only care what Neil wants. Not what’s fair.” Roberts also supported Young’s philanthropic and political work, and collaborated with Young creatively on film and video projects, often under his birth name of Elliot Rabinowitz. He launched Vapor Records with Young in 1995.

Roberts also managed Tom Petty, and was pivotal in launching the careers of Tracy Chapman and The Cars. He was also associated with Jackson Browne, Bob Dylan, the Eagles, Talking Heads, Devo, Spiritualized, Mazzy Star, Devendra Banhart, The Alarm, and others.