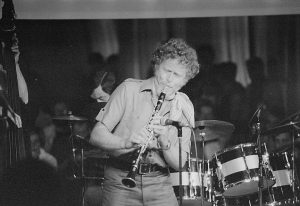 Robert Sage Wilber (March 15, 1928 – August 4, 2019) was an American jazz clarinetist, saxophonist, and band leader. Although his scope covers a wide range of jazz, Wilber was a dedicated advocate of classic styles, working throughout his career to present traditional jazz pieces in a contemporary manner. He played with many distinguished jazz leaders in the 1950s and 1960s, including Bobby Hackett, Benny Goodman, Sidney Bechet, Jack Teagarden and Eddie Condon. In the late 1960s, he was an original member of the World’s Greatest Jazz Band, and in the early 70s of Soprano Summit, a band which gained wide attention. In the late 1970s, he formed the Bechet Legacy Band.

Wilber was active in jazz education, including working as director of the Smithsonian Jazz Repertory Ensemble. He wrote for films, including The Cotton Club. In his autobiography, Music Was Not Enough, he recounts his childhood, meeting his mentor Sidney Bechet, in 1946, and his struggles as a musician in the 1950s and 1960s. He died at the age of 91 in 2019.