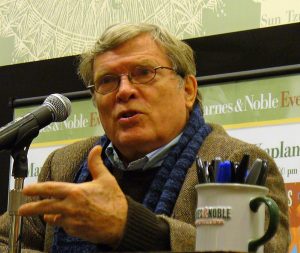 Donn Alan Pennebaker (July 15, 1925 – August 1, 2019) was an American documentary filmmaker and one of the pioneers of Direct Cinema. Performing arts and politics were his primary subjects. In 2013, the Academy of Motion Picture Arts and Sciences recognized his body of work with an Academy Honorary Award or “lifetime Oscar”.

Pennebaker has been described as “arguably the pre-eminent chronicler of Sixties counterculture”.

First films and early success
Drew Associates would produce nine more documentaries for Living Camera, including Crisis, which chronicled President Kennedy and Attorney General Robert Kennedy’s conflict with governor George Wallace over school desegregation. Then in 1963, Pennebaker and Leacock left the organization to form their own production firm, Leacock-Pennebaker, Inc. Pennebaker would direct a number of short films over the course of two years. One of them was a rare recording of jazz vocalist Dave Lambert, as he formed a new quintet with singers such as David Lucas, and auditioned for RCA. The audition was not successful, and Lambert died suddenly in a car accident shortly thereafter, leaving Pennebaker’s film as one of the few visual recordings of the singer, and the only recording of the songs in those rehearsals. The documentary got attention in Europe, and a few weeks later, Bob Dylan’s manager, Albert Grossman, approached Pennebaker about filming Dylan while he was touring in England. The resulting work, Dont Look Back (there is no apostrophe in the title) became a landmark in both film and rock history, “evoking the ’60s like few other documents”, according to film critic Jonathan Rosenbaum. The opening sequence alone (set to Dylan’s “Subterranean Homesick Blues” with Dylan standing in an alleyway, dropping cardboard flash cards) became a precursor to modern music videos. It was even used as the theatrical trailer. It would later be included in the Library of Congress’ National Film Registry in 1998, and it was later ranked at No. 6 on Time Out’s list of the 50 best documentaries of all time.

Pennebaker would also film Dylan’s subsequent tour of England in 1966, but while some of this work has been released in different forms (supplying the framework for Martin Scorsese’s Dylan documentary, No Direction Home, and re-edited by Dylan himself in the rarely distributed Eat the Document), Pennebaker’s own film of the tour (Something Is Happening) remains unreleased. Nevertheless, the tour itself has become one of the most celebrated events in rock history, and some of the Nagra recordings made for Pennebaker’s film were later released on Dylan’s own records. All of the Nagra recordings made during the 1966 European appearances were made by Richard Alderson, who, for years, never received recognition. All of his tapes are what comprise the 2016 released “Bob Dylan: the 1966 Live Recordings”. It is Alderson who notes that many of the UK concerts were, in fact, filmed by Howard Alk.

The same year Dont Look Back was released in theaters, Pennebaker worked with author Norman Mailer on the first of many film collaborations. He was also hired to film the Monterey Pop Festival, which is now regarded as an important event in rock history on par with 1969’s Woodstock Festival. Pennebaker produced a number of films from the event, capturing breakthrough performances from the Jimi Hendrix Experience, Otis Redding and Janis Joplin that remain seminal documents in rock history. The first of these films, Monterey Pop, was released in 1968 and was later ranked at No. 42 on Time Out’s list of the 50 best documentaries of all time. Other performers including Jefferson Airplane and the Who also received major exposure from Pennebaker’s work.

1970s–1990s
Pennebaker continued to film some of the era’s most influential rock artists, including John Lennon (whom he first met while filming Dylan in England), Little Richard, Jerry Lee Lewis, and David Bowie during his “farewell” concert in 1973.

Pennebaker was one of many participants in John Lennon and Yoko Ono’s 1971 film Up Your Legs Forever.
> > > > > > > > > >
In 1988, Pennebaker, Hegedus and David Dawkins followed Depeche Mode as they toured the U.S. in support of Music for the Masses, the band’s commercial breakthrough in America. The resulting film, 101, was released the following year, and prominently features a group of young fans travelling across America as winners of a “be-in-a-Depeche-Mode-movie-contest,” which culminates at Depeche Mode’s landmark concert at the Rose Bowl in Pasadena. Because of this, the film is widely considered to be the impetus for the “reality” craze that swept MTV in the following years, including The Real World and Road Rules. In various interviews, DVD commentaries and on their own website, both Pennebaker and Hegedus have cited 101 as “their favorite” and “the one that was the most fun to make” out of all their films to date.

Pennebaker’s films, usually shot with a hand-held camera, often eschew voice-over narration and interviews in favor of a “simple” portrayal of events typical of the direct cinema style Pennebaker helped popularize in the U.S. Of such an approach, Pennebaker told interviewer G. Roy Levin published in 1971 that “it’s possible to go to a situation and simply film what you see there, what happens there, what goes on, and let everybody decide whether it tells them about any of these things. But you don’t have to label them, you don’t have to have the narration to instruct you so you can be sure and understand that it’s good for you to learn.” In that same interview with Levin, Pennebaker goes so far as to claim that Dont Look Back is “not a documentary at all by my standards”. He instead repeatedly asserts that he does not make documentaries, but “records of moments”, “half soap operas”, and “semimusical reality things”.

An accomplished engineer, Pennebaker developed one of the first fully portable, synchronized 16mm camera and sound recording systems which revolutionized modern filmmaking.[28] His aesthetic and technical breakthroughs have also had a major influence on narrative filmmaking, influencing such realist masterworks as Barbara Loden’s Wanda, which was filmed and edited by one of Pennebaker’s protégés, Nicholas Proferes, and even popular satires such as Tim Robbins’ Bob Roberts.

His style has also been spoofed by Weird Al Yankovic and the mockumentary series Documentary Now.

Pennebaker died at his home in Sag Harbor, New York on August 1, 2019.

This article has been greatly shortened; to read the whole biography, go here:
https://en.wikipedia.org/wiki/D._A._Pennebaker