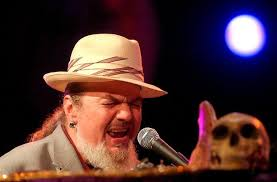 New Orleans’ Grammy winning soul singer Irma Thomas remembers Dr. John for his New Orleans-style wit. “He had his own vocabulary,” she said “and it just rolled out. You had to be a New Orleanian to know what he was talking about.”

You cannot separate Dr. John from New Orleans. He’s like Louis Armstrong. He’s like a cultural ambassador,” music writer Michael Hurtt told the Associated Press in 2005. “He’s basically packaged this culture he came out of with a lot of nuances that are pretty subtle.”

* Tompall & the Glaser Brothers was an American country music group composed of three brothers: Chuck Glaser (February 27, 1936 – June 10, 2019), Jim (December 16, 1937 – April 6, 2019), and Tompall Glaser (September 3, 1933 – August 13, 2013). The Glaser Brothers started singing together at country fairs and contests in and around the Spalding area when they were preteens. In 1957 the group got their big break when they appeared on Arthur Godfrey’s Talent Show and attracted the attention of several well known country stars, including Marty Robbins. https://en.wikipedia.org/wiki/Tompall_&_the_Glaser_Brothers

Previous:
EVENTS: Calendar and Bell Ringers for Thursday, June 6, 2019
Next:
THOUGHTS and PRAYERS: Steve Lawrence Has Been Diagnosed With Alzheimer’s