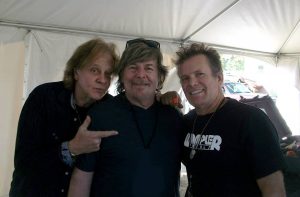 Jock Bartley: So sad to hear of the passing of rocker EDDIE MONEY earlier today. He was 70 years old and had been sick for years. Eddie was a friend and extremely funny guy, FF [Firefall] played a number of shows w him over the decades. Many of us who knew him thought he was working too much on the road as his health declined. Sad. R.I.P. Eddie Money. You will be missed!

TWO TICKETS TO PARADISE! Here I am backstage yesterday, August 2, 2014 in Winter Park, CO. with EDDIE MONEY (left) and his drummer GLENN SYMMONDS (right). We drove up to see a big free concert also featuring Rick Derringer, but traffic was so-o-o bad up I-70 W that we missed Rick D. altogether, and Eddie was minutes before going on stage when we got there. But after the show we got back to say hi, hang some & take a few photos. I first met Eddie Money in the later 1970s when Firefall would play shows with him (sometimes on big festivals with groups like Cheap Trick, Doobie Bros., Heart, Kenny Loggins or others). Great guys! **EDDIE MONEY’s new single “One More Soldier Coming Home” helps to raise $$ for U.S. military Vets who have brain injuries and disabilities, working with the ‘Fallen Heroes Fund’!! Way to go E.M.!! Glenn is a cancer survivor and gives back to cancer research by donating $$ from certain T-shirt & CD sales they sell. Two fantastic guys, old pros ..and to be sure, the band still sounds great!!

Heaven’s Guest Book: Eddie Money, best known for his songs “Two Tickets to Paradise,” “Take Me Home Tonight” and “Baby Hold On,” died at the age of 70 A statement provided by his family reads: “The Money Family regrets to announce that Eddie passed away peacefully early this morning. It is with heavy hearts that we say goodbye to our loving husband and father. We cannot imagine our world without him. We are grateful that he will live on forever through his music.”

Previous:
IN MEMORIAM: Ric Ocasek, Leader of The Cars
Next:
INTERESTING BITS: Jag Tones Sends A Bunch of Reasons You Are Too Old to Play Gigs