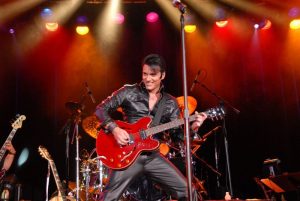 By John Katsilometes, Las Vegas Review-Journal | Trent Carlini, the long-running Elvis tribute artist who played several Las Vegas hotels, was surrounded by his family when he died on Sunday, December 8, 2019.

Carlini’s sister Laura Trent confirmed Tuesday that Carlini suffered a serious stroke on Nov. 23 (correcting an earlier report that the stroke was Saturday) and had been hospitalized up until his death at 1:20 p.m. Sunday at Centennial Hills Hospital. Carlini, whose legal name was Roberto Romolo Sfasciapagliari Trentacarlini, was 57. Clark County officials said Tuesday it would be six to eight weeks to determine the cause of death.

Carlini is survived by daughters Thalia, Isabella and Sophia Trentacarlini from his first marriage to Claudia Noriega-Bernstein; and his son, Gabriel, from his second marriage; his father, Lorenzo T. Carlini; his sisters, Laura and Lori Trentacarlini (Sergio DeCarolis); his brother, Michael Trentacarlini; and his niece, Ilaria DeCarolis.

Carlini was a headliner at many Las Vegas resorts, chiefly the Las Vegas Hilton/LVH/Westgate Las Vegas. Of his career, he once remarked, “It’s not really about how many changes you can make, and it’s really, really not about how many eras you can perform. It’s about when you open your mouth. I just open my mouth and God does the rest. I’m just going to let God be the one to cut me off.”

There are no plans for a funeral in Las Vegas. He had wished to be cremated and buried with his mother, Aloisia Sfasciapagliari, in the family’s original hometown of Porto San Giorgio, Italy. However, Carlini’s family is planning a tribute to be held for him on Jan. 8 — Elvis’ birthday — with details to be announced via social media.

Carlini got to know two major figures in Presley’s life and career — manager Col. Tom Parker and Joe Esposito, who was Elvis’ right-hand man. Esposito stood up for Carlini in his 2005 wedding to his second wife, Amanda, at the then-Las Vegas Hilton.

Esposito had seen Carlini perform at the Hilton, where Presley himself had sold out every show for seven years.

“At certain times on stage, it’s scary,” Esposito once said. “He can tilt his head down, he looks up with his eyes, you think it’s Elvis.”

The Next Best Thing: Who Is the Greatest Celebrity Impersonator? was an American reality TV series competition of celebrity impersonators with a grand prize of $100,000. It was hosted by Michele Merkin. The judges were Jeffrey Ross, Elon Gold and Lisa Ann Walter; ultimately, the winner was chosen by viewer voting. The eight-episode series debuted May 30, 2007 on the ABC television network and ended the same year.

The judges narrowed down the contestants to 30 semi-finalists, 28 of whom were featured in fully shown performances over two episodes.