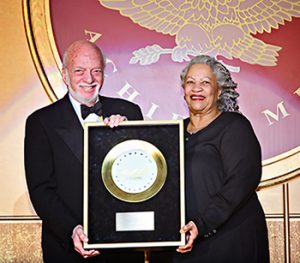 Harold Smith Prince (91) (January 30, 1928 – July 31, 2019) was an American theatrical producer and director associated with many of the best-known Broadway musical productions of the 20th century.

Over the span of his career, he garnered 21 Tony Awards, more than any other individual, including eight for directing, eight for producing the year’s Best Musical, two as Best Producer of a Musical, and three special awards.

Prince was born in Manhattan, the son of Blanche (Stern) and Harold Smith. He was adopted by his stepfather, Milton A. Prince, a stockbroker. His family was of German Jewish descent. Following his graduation from the Dwight School in New York, he entered the University of Pennsylvania, where he followed a liberal arts curriculum and graduated three years later at age 19. He later served two years with the United States Army in post-World War II Germany.

Prince began work in the theatre as an assistant stage manager to theatrical producer and director George Abbott. Along with Abbott, he co-produced The Pajama Game, which won the 1955 Tony Award for Best Musical. He went on to direct his own productions in 1962 beginning with A Family Affair and hit a series of unsuccessful productions.

He almost gave up musical theater right before he hit success with Kander and Ebb’s Cabaret in 1966. 1970 marked the start of his greatest collaboration, with composer/lyricist Stephen Sondheim. They had previously worked on West Side Story and at this point decided to embark on their own project. Their association spawned a long string of productions, including Company (1970), Follies (1971), A Little Night Music (1973), Pacific Overtures (1976), and Sweeney Todd (1979). Following Merrily We Roll Along (1981), which was not successful, running for 16 performances, they parted ways until Bounce (2003).

He directed two of Andrew Lloyd Webber’s successes, Evita (1979) and The Phantom of the Opera (1986). He was offered the job of directing Cats by Lloyd Webber but turned it down.

Prince married Judy Chaplin, daughter of composer and musical director Saul Chaplin, on October 26, 1962. They are parents of Daisy Prince, a director, and Charles Prince, a conductor. Actor Alexander Chaplin, best known as “James Hobert” on Spin City, is Prince’s son-in-law. At the time of his death, Prince lived in Manhattan and Switzerland.

The marquee lights of Broadway theatres were dimmed on July 31, 2019 in the traditional gesture of honor.

July 2019
31: Harold Prince, 91, American theatre director and producer (The Phantom of the Opera, Fiddler on the Roof, West Side Story).

Previous:
MOVIES and BOOKS: David Crosby: Remember My Name
Next:
INTERESTING BITS: Wikipedia Featured Article of the Day: About the Song “Touch Me I’m Sick”