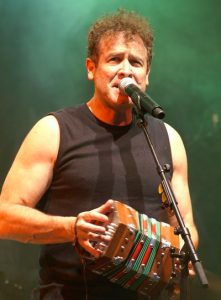 Jonathan Paul Clegg OBE, OIS (7 June 1953, Bacup, Lancashire – 16 July 2019, Johannesburg was a South African musician and anthropologist who recorded and performed with his bands Juluka and Savuka, and as a solo act, occasionally reuniting with his earlier band partners. Sometimes called Le Zoulou Blanc (French for “The White Zulu”), he was an important figure in South African popular music, with songs that mix Zulu with English lyrics and African with various Western music styles.

> > > > > > >
His song “Scatterlings of Africa” gave him his only entries in the UK Singles Chart to date, reaching No. 44 in February 1983 with Juluka and No. 75 in May 1987 as Johnny Clegg and Savuka. The following year the song was featured on the soundtrack to the 1988 Oscar-winning film Rain Man.

Also, his song “Life is a Magic Thing” was featured in FernGully: The Last Rainforest.

Savuka’s song “Dela” was featured on the soundtrack of the 1997 film George of the Jungle and its 2003 sequel, while “Great Heart” was the title song for the 1986 film Jock of the Bushveld. “Cruel, Crazy, Beautiful World” was featured in the 1990 film Opportunity Knocks and 1991 film Career Opportunities. “Great Heart” was also the end credits song for the 2000 Disney movie Whispers: An Elephant’s Tale. In 2002, Clegg provided several songs and incidental background music for Jane Goodall’s “Wild Chimpanzees” DVD. Included in the extras on the disc are rare scenes of Clegg in the recording studio.

The Juluka song “Spirit is the Journey” was covered by bluegrass artist Sam Bush on his 2004 album King of my World.

Bill Haley & His Comets were an American rock and roll band, founded in 1952 and continued until Haley’s death in 1981. The band was also known as Bill Haley and the Comets and Bill Haley’s Comets (and variations thereof). From late 1954 to late 1956, the group placed nine singles in the Top 20, one of those a number one and three more in the Top Ten. The single Rock Around the Clock became the biggest selling rock n roll single in the history of the genre.

Bandleader Bill Haley had previously been a country music performer; after recording a country and western-styled version of Jackie Brenston and his Delta Cats “Rocket 88”, a rhythm and blues song, he changed musical direction to a new sound which came to be called rock and roll.

Although several members of the Comets became famous, Bill Haley remained the star. With his spit curl and the band’s matching plaid dinner jackets and energetic stage behavior, many fans consider them to be as revolutionary in their time as the Beatles were a decade later.

Following Haley’s death, no fewer than seven different groups have existed under the Comets name, all claiming (with varying degrees of authority) to be the continuation of Haley’s group. As of the end of 2014, four such groups were still performing in the United States and internationally.
> > > > > > >
The new name [Bill Haley & His Comets] was adopted in the fall of 1952. Members of the group at that time were Haley, Johnny Grande, Billy Williamson and Marshall Lytle. Grande usually played piano on records but switched to accordion for live shows as it was more portable than a piano and easier to deal with during musical numbers that involved a lot of dancing around. Soon after renaming the band Haley hired his first drummer, Earl Famous. Displeased with lineup, Haley sought out Dick Boccelli (also known as Dick Richards), who turned down the job but recommended a young drummer Charlie Higler. Soon after, Haley asked Richards again, who then accepted the role. During this time (and as late as the fall of 1955), Haley did not have a permanent lead guitar player, choosing to use session musicians on records and either playing lead guitar himself or having Williamson play steel solos.

Russell Smith (6/17/1949 – 7/12/2019) was an American country music singer-songwriter. Formerly the lead singer of the Amazing Rhythm Aces, Smith launched a solo career in 1984. He was signed by Epic Records in 1988, and the music label released his debut album, This Little Town, the following year. His highest-charting single, “I Wonder What She’s Doing Tonight,” peaked at No. 37 on the Billboard Hot Country Singles & Tracks chart in 1989. In 1993, Smith became the lead singer of bluegrass novelty group Run C&W.

Smith also found success as a songwriter, penning Number One songs for Randy Travis (“Look Heart, No Hands”), T. Graham Brown (“Don’t Go to Strangers”), Don Williams (“Heartbeat in the Darkness”), and Ricky Van Shelton (“Keep It Between the Lines”). In addition, he wrote “Big Ole Brew” which became a No. 3 country music hit for Mel McDaniel in 1982.

Following a cancer diagnosis, Smith died in July 2019 at the age of 70.