IN MEMORIAM: Juice Wrld; Jerry Naylor Jackson of The Crickets 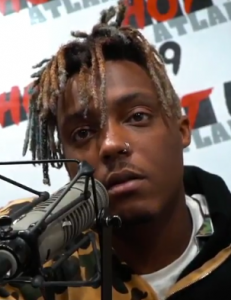 Jarad Anthony Higgins (December 2, 1998 – December 8, 2019), known professionally as Juice Wrld (stylized as Juice WRLD; pronounced “Juice World”), was an American rapper, singer, and songwriter. Born in Chicago, Illinois, he was known for his singles “All Girls Are the Same” and “Lucid Dreams” which helped him gain a recording contract with Lil Bibby’s Grade A Productions and Interscope Records.

“All Girls Are the Same” and “Lucid Dreams” acted as singles for Juice Wrld’s debut studio album Goodbye & Good Riddance (2018) which became certified Platinum by the Recording Industry Association of America (RIAA). The album enjoyed positive critical reception, and contained three other singles: “Armed and Dangerous”, “Lean wit Me” and “Wasted”, all of which charted on the Billboard Hot 100. After collaborating with Future on the mixtape Wrld on Drugs (2018), Juice Wrld released his second album Death Race for Love in 2019, which became his first number-one album on the Billboard 200.

Higgins had a history of drug abuse and spoke openly about his experiences.[12][5] In 2019, he was living in Los Angeles with his girlfriend, Alexia. The two had met around the time Higgins’s music career was starting to launch.

On December 8, 2019, Higgins was aboard a private Gulfstream jet flying from Van Nuys Airport in Los Angeles to Midway International Airport in Chicago, where law enforcement officers were waiting for the jet to arrive, as the pilot had notified them while the flight was en route that the jet was carrying guns and drugs. Law enforcement later revealed they found three handguns and 70 lb (32 kg) of marijuana on the aircraft. They also stated several members of Higgins’ management team aboard the flight attested that Higgins had taken “several unknown pills”, including allegedly swallowing multiple Percocet pills to hide them while police were on board the plane searching the luggage.

Higgins began convulsing and going into seizures, after which two doses of the emergency medication Narcan were administered as an opioid overdose was suspected. Higgins was transported to nearby Advocate Christ Medical Center in Oak Lawn, where he died at age 21.
https://en.wikipedia.org/wiki/Juice_Wrld

Jerry Naylor Jackson (March 6, 1939 – December 5, 2019) Jerry Naylor, was an American country and rock and roll artist and broadcaster and inspirational speaker. From late 1961 thru 1964 he was lead vocalist of The Crickets after the death of Buddy Holly.

Jerry Naylor Jackson was born in Chalk Mountain, Texas to a great depression farming family. His mother played piano in their local church and encouraged Jerry’s love of music. Jerry listened to the greats of Country music such as Hank Williams, Sr., Lefty Frizzell, Bob Wills (with whom he shared his birthday) and Slim Whitman, and Whitman’s steel guitar player, Hoot Raines, led the 9-year old Naylor to purchase and learn to play a steel guitar with money he earned picking cotton. By the age of 12 years, Jerry was playing that steel guitar at local honky tonks in and around Carlsbad and San Angelo, Texas, with his brother-in-law, Tommy Briggs’ Hillbilly band which also featured Sherman Hamblin on fiddle and Earnest Smith lead guitar and vocals.

In 1953, at the age of 14, Jerry Naylor began working at a new radio station in San Angelo, Texas called KPEP. Veteran broadcaster, Joe Treadway, who with his wife Matilda (Tillie) would become Jerry’s foster parents when Naylor’s mother died in 1955, hired Naylor and taught him to be a disc jockey, radio commercial salesman and radio maintenance engineer. Joe Treadway encouraged Naylor to continue his performing, but on the insistence of Jerry’s mother, gave him the opportunity to be the lead singer of the band. KPEP was co-owned by Joe Treadway and Dave Stone (Pinkstone) who also owned the, now legendary, KDAV radio station in Lubbock, Texas where Buddy Holly was also an on-air performer with Bob Montgomery, “Buddy & Bob”.

These two West Texas radio stations were the first full-time country music radio stations in America and promoted live touring shows throughout West Texas with stars from the Grand Ole Opry in Nashville, Tennessee, and the Louisiana Hayride in Shreveport, Louisiana.

Joe Treadway and his close friend, Tillman Franks, Talent Coordinator for the Louisiana Hayride, managed Naylor’s young singing career and booked Jerry and his band on these touring shows. It was here at KPEP that Naylor first heard rockabilly music, at its very beginning. After hearing and playing Elvis Presley’s “That’s Alright Mama” Sun Records recording, Naylor was backed by a Trio from San Angelo called the Cavaleirs at a talent show there in 1956. At the time Alton Baird was the band’s original lead singer. In c.1957 after Baird went into the military, Naylor became the lead singer of the rockabilly band The Cavaliers.

Career with The Crickets
In 1961, Jerry Naylor became the lead singer for the Crickets. This was two years after the tragic death of Buddy Holly and the departure of other singers from the group. Jerry Ivan Allison, Buddy Holly’s drummer and co-songwriter, owned the name and trademark of “The Crickets”. Jerry Allison, now the sole owner of “The Crickets” their manager, H. Daniel Whitman, offered Naylor the lead singer position with The Crickets following their signing with Liberty Records, Hollywood, California. Jerry recorded as lead singer with the Crickets until 1964. Their first hit for the label was “Don’t Ever Change”, a Carole King/Gerry Goffin written song, which reached the number 5 position on the national charts in the UK. The very first song the new Beatles group performed live on BBC, in 1963, was The Crickets’ hit, “Don’t Ever Change.” and the Beatles all acknowledged the Crickets influence in a letter sent to them following a Crickets tour of the UK in 1962. More hit singles followed and the Bobby Vee Meets the Crickets Album was a best-selling album in the UK and Europe. The Crickets also had a hit EP recording on EMI/Liberty Records in 1963, featuring four tracks including, “My Little Girl” and “Teardrops Fall Like Rain,” both featured in the Columbia Motion Pictures Movie, Just for Fun.

Personal life and family
By late 1957 he joined the Army and went to Germany after basic. During 1962 while living in California Jerry joined The Crickets, alternating with Sonny Curtis in singing lead with the band until March 1965. He appeared with the Crickets in the UK movie “Just for Fun”. On January 30, 1966, Naylor married Pamela Ann Robinson. Jerry and Pamela, married over four decades, have three children and six grandchildren.

Previous:
Photos from the 2019 COMBO Holiday Party
Next:
TALENT NEEDED: L’Oréal USA For Women In Science