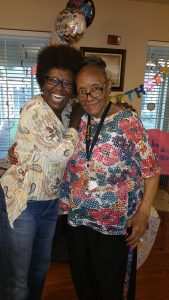 At this time, we have no details on memorial services for Ms. Curlee. We will pass that information along as soon as we receive it.

From Erica Brown on Fb: 1927-2019. Mourning the passing of one of the great influences of my music life, Justina Curlee, also known as JC, Senior Citizen of the Airwaves, also known as MamaKat, and to those of us who knew her for many years, Miss Tina. I have not many words right now as I process this loss. Thanks to everyone who made her life bright in her later years, we appreciate you so much. Please extend your condolences to her son Everett Davis, and keep him in your prayers. I’m sure he will release more information about any memorial services at some point. I’ll be posting photos of me and her as time goes on (there are SO MANY!!) Thanks everyone.

Carla Jordan: MamaKat was an absolutely amazing woman. She was a hoot! Vibrant and true! She paved the way for so many. What a huge loss for the community of music in Colorado and beyond. My deepest condolences to her family and friends and crazy huge respect to the woman, the amazing MamaKat.

Husted: On the Air, MamaKat Gets Jiggy With Denver

By Bill Husted, Denver Post – Aug. 10, 2011 | Justina Curlee, 83, is sometimes called J.C., but on the air at KUVO, she’s always MamaKat, the Senior Citizen of the Airwaves. Born in Denver, she was adopted at 6 months and moved with her new family to Walsenburg, where her dad was a miner with Colorado Fuel and Iron. They moved to Segundo, where her dad passed when Curlee was 13. The family then moved to Pueblo, where MamaKat went to high school and junior college. She worked in the local hospital and had a short marriage that gave her twin boys. She returned to Denver and graduated from Metropolitan State College in 1975. A single parent, she worked for the Office for Civil Rights for 33 years, followed by work at Denver General Hospital and the dog track. Finally retired, she has worked at KUVO, Denver’s public-radio stop for jazz and blues, as a volunteer for 21 years. MamaKat has been on the air there for 18 years, the past seven spinning 6 to 8 Friday nights on her show, “Rockin’ N Rhythm With MamaKat.” She had hip surgery in June, so Friday night marks her return to the airwaves. She orders a Sprite.

MamaKat: It’s my drink. I gave up drinking. That’s been, I would say, 20 years ago. I got tired of getting sick. I would go out with the girls and have a good time, and the next morning my head would feel like this, and I had headaches and I didn’t like being uncomfortable. So I said forget it.

BH: Your show is like appointment radio. You have a lot of fans.

MamaKat: I play jazz, blues, Bobby “Blue” Bland, B.B. King, Ray Charles, Joey DeFrancesco, the organ player. I love them. I go in with my own playlist. I have my own library at home, so I bring in my own CDs.

BH: Do you play an instrument?

MamaKat: I took piano lessons for 12 years, classical music. And I played for the choir in Pueblo when I was 16.

BH: Do you talk much on the radio?

MamaKat: Not too much. I may say something when I announce a CD, I give out the phone number, [deleted], if you want to call me, if you have any questions, requests. Other than that, I just play the music.

BH: What about the music in Denver over the years?

MamaKat: Oh, Lord, yes. When we had the Casino and the Rainbow Ballroom. We had Jimmy McGriff and Hank Crawford, Jimmy Smith. We had all the stars coming in.

BH: How do you feel about Denver?

MamaKat: It’s my hometown, But there have been so many changes. People say to me, “MamaKat, that was in your day,” and I say I know. And I have to put up with what’s going on now. But it was nicer back when Five Points was active. That was the place to go. We went to the Rossonian Hotel and the Porters and Waiters Club.

BH: Are you the oldest deejay in Denver?

MamaKat: Some people think I am.

BH: What gadgets do you have?

MamaKat: None. I listen to the music on a CD player. No cellphone. I don’t tweet and I don’t Twitter. I am old-fashioned. At home, I have my TV and my phone.

BH: What about pets?

MamaKat: I like dogs. I do. But I don’t think a dog should be in an apartment. They pee in the elevator.

BH: What’s your idea of happiness?

MamaKat: You have to be happy within yourself. I don’t see the point of sitting around feeling sorry for myself.

MamaKat: I’ve never thought about that.

BH: Is there a trait you don’t like in yourself?

MamaKat: My nails. I get them done once a month. And I get my hair done. I figure I got to keep looking good.

BH: Is there a word or phrase you overuse?

MamaKat: Yes, but I can’t say it here. But being a deejay, I say “Get jiggy with it,” and “Get down to the nitty gritty.”

BH: Who or what is the greatest love of your life?

MamaKat: My parents. My dad died when I was 13, and my mother died when she was 91, that was seven years ago. They adopted me, and that was a lot to do. And they were excellent. I had everything. I wasn’t what you could call spoiled, but by the same token, I had toys, and there were things I could do and things I could not do. In those days, in the coal mining towns, we didn’t do much except associate with our neighbors. We didn’t have juvenile delinquents in those days. Parents took care of their kids, and kids respected their parents. Oh, there were times we got our buns spanked, but every one of us grew up to be boys and girls and ladies and gentlemen.

BH: When were you happiest?

MamaKat: I guess when my mother was with us. But I have been a happy person. I’m just not a person who’s unhappy. I was from a religious family, and you were thankful for what you had. You’re thankful that you can get up the next morning.

MamaKat: I consider my talent being a deejay because I never thought I could do something like that.

MamaKat: Taking care of myself for as long as I have.

MamaKat: No. I buy frozen food and put it in the microwave, and it’s done.

BH: Where would you live?

MamaKat: I like Chicago because there is a lot going on. I went to Buddy Guy’s club, and that was exciting. I’ve been to Kingston Mines and a place where they serve breakfast and play the blues.

MamaKat: Oh I know it. I lived there for three years, and I froze my buns off. I had a fur coat on, and it felt like I had a sheet around me.

BH: What’s your most treasured possession?

BH: Do you watch TV?

BH: What’s your favorite thing to do?

MamaKat: Kicking it up with the jazz.

BH: What do you most dislike?

BH: What wouldn’t you eat.

MamaKat: That my marriage didn’t last. He passed away about four years ago. He didn’t help with the kids. He didn’t even know their names. I tried to get child support, but I couldn’t. He sent one check for $35. Now what’s one check for $35 going for two kids for their whole lives?

BH: Do you have a motto?

MamaKat: Live a good life no matter what.

Interview conducted, condensed and edited by Bill Husted: 303-954-1486 or bhusted@denverpost.com.

Reminder: PLEASE! Don’t kill yourself. Call a friend, wait until after midnight, get a lot of sleep, or call 1-800-273-TALK. Suicide is a permanent solution to a temporary problem. Trust us – You’ll be glad you stayed alive at some point in the near future. Walk outside and look at the stars and think how much you will miss them. You have a purpose in life – it’s up to you to find it. A lot of people – like Charity (above) – never have a choice in the matter and do not get a chance to live a full life. Live while you can.

Previous:
NEWS: News From Julie Gellar and Setting the Stage
Next:
EVENTS: Denver Arts & Venues Presents Our Next IMAGINE 2020 Speakers