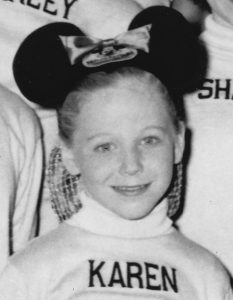 Karen Pendleton in 1956 (photo from Wikipedia; no credit available)

Karen Anita Pendleton (August 1, 1946 – October 6, 2019) was an original Mickey Mouse Club Mouseketeer on ABC television from 1955–1959. She was one of only nine Mouseketeers who were on the show during its entire original run.

Pendleton was recruited to audition for the Mickey Mouse Club when Disney producers visited a Los Angeles dance studio seeking young talent. She toured Australia in 1959 and 1960 with a number of other Mouseketeers and Jimmie Dodd. She was often coupled with Carl “Cubby” O’Brien in the television series and in live performances, as they were the youngest members of the cast.

After the show’s run, she left show business and finished school. She married in 1970, had a daughter in 1973, but divorced in 1985. Following an automobile accident in 1983, in which she was paralyzed from the waist down, she returned to college and earned a bachelor’s degree in psychology. She worked at a shelter for battered women and served on the board for the California Association of the Physically Handicapped.

[COMBO Editor’s note: Although the article doesn’t mention it, Karen was a singer as well. All of the Mouseketeers could sing, dance and act. I recognized her name in the list and felt it is a shame that no one noticed that someone who effected so many children’s lives back in the ‘50s did not receive the credit she was due upon her passing.]

Kim Shattuck – of The Muffs, The Panoras

Kimberly Dianne Shattuck (July 17, 1963 – October 2, 2019) was an American singer, musician, and songwriter. She was the lead vocalist, guitarist, and primary songwriter of the American punk rock band the Muffs, which formed in 1991. From 1985 to 1990, Shattuck was a member of The Pandoras. In 2001, she was a singer, guitarist and songwriter for The Beards, a superpop side project composed of Shattuck, Lisa Marr, and Sherri Solinger.

Shattuck was born July 17, 1963 in Burbank, California to Kent and Betty (née Hess) Shattuck. She was raised in Orange County along with her siblings, a brother, Kirk, and sister, Kristen. She began playing guitar while attending Orange Coast College, where she was studying photography.

Shattuck formed the Muffs in 1991 in Los Angeles. The band remained active over the following two decades, releasing six albums between 1993 and 2014.

In addition to her work with the Muffs, Shattuck was involved in numerous other musical projects: She sang on a NOFX song, “Lori Meyers” on the album Punk in Drublic, as well as on a Bowling for Soup song, “I’ll Always Remember You (That Way)”, which was included with the single “My Wena”. She also collaborated with vocals for the Kepi Ghoulie song “This Friend of Mine” on the album American Gothic and The Dollyrots for their track “Some Girls” off the album A Little Messed Up. Shattuck is the namesake of Dr. Shattuck, a character on Mr. Show (HBO, 1995–1999).

Shattuck joined Pixies for their fall 2013 European tour, following the departure of original member Kim Deal. At the conclusion of the tour in late November 2013, she was fired by the band.

Shattuck died at her home in Los Angeles on October 2, 2019, from complications of ALS [Lou Gehrig’s disease], aged 56. She never publicly disclosed that she had the disease, but did state that it ran in her paternal family. Shattuck was survived by her mother and two siblings, as well as her husband of 16 years, Kevin Sutherland. Shortly before her death, the Muffs had recorded their seventh studio album, No Holiday, scheduled for release on October 18, 2019.