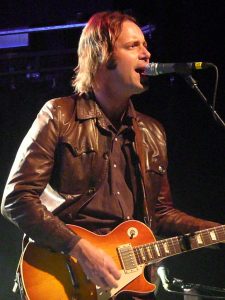 Neal Casal (November 2, 1968 – August 26, 2019) was an American guitarist, singer, songwriter, and photographer. First rising to prominence as lead guitar with Rickey Medlocke’s Blackfoot from 1988-1993, he is best known as a member of Ryan Adams’ backing band the Cardinals from 2005 until 2009, with whom he recorded three studio albums. He played in several groups, including the Chris Robinson Brotherhood, Hard Working Americans, The Skiffle Players and Circles Around the Sun – and released twelve albums as a solo artist.

In 2010, Casal released a photo book, Ryan Adams & the Cardinals: A View of Other Windows, documenting his time spent within the band. He released his most recent solo album, Sweeten the Distance, in 2011.

Casal provided photographs for the final album of Ryan Adams and The Cardinals Cardinals III/IV, which was released in 2010.

In January 2008 Casal exhibited his photography at the Bauhaus Gallery in Tokyo.

Casal shot the album cover and all photos for the artwork for Sarah Lee Guthrie & Johnny Irion’s 2011 album Bright Examples.

In 2010 Casal provided photographs for Danny and the Champions of the World album Streets of Our Time.

Casal provided never before seen photographs for the Ryan Adams and The Cardinals EP Class Mythology, released in April 2011.

In 2016, Casal photographs appeared on the front and back covers of The Hard Working Americans record “Rest In Chaos”

Casal was Owen Wilson and Vince Vaughn’s voice coach for the 2004 movie Starsky & Hutch and played guitar on Owen Wilson’s performance of “Don’t Give Up On Us” which was also featured on the soundtrack.

Casal sang the lead vocals on “The Game” on “The Music of Jason Crigler”, released on Rudy Records. Casal co-wrote and sang backing vocals on “The Truest Kind”, on the album Danny and The Champions of The World.

In 2011, Casal worked as Garrett Hedlund’s guitar instructor for the movie Country Strong and also appears in the film as Gwyneth Paltrow’s guitar player.

He was born in Fort Worth, Texas and, after his parents split up, was raised by his mother in Amarillo. From the mid-1950s, he worked on radio stations in Dallas, Houston, Cleveland, Denver and Portland, where he was known as Dennis James. After working at KYA in San Francisco, he moved to KRLA in Los Angeles in 1962, and was involved in the Beatles’ arrival in the city in August 1964.

He had a regular afternoon show, featuring character voices including “Maude Skidmore”, and owned the Revelaire Club in Redondo Beach. He worked at KRLA between 1962 and 1969 (with a break between 1965 and 1967), and again for spells in the 1970s and 1980s. In the 1970s, he also managed bands including The Turtles, Three Dog Night, and Steppenwolf.