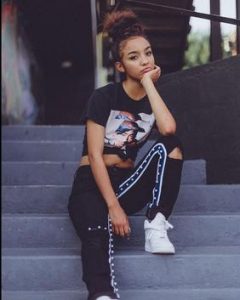 Lexii Alijai was born and raised in Saint Paul, Minnesota. She was the granddaughter of musician Roger Troutman, founder of the band Zapp. Her father, Roger Lynch, the son of Roger Troutman., was also a musician. She attended Como Park Senior High School in the Como Lake area of Saint Paul, following an interest in basketball, but then focused on music instead and transferred to Creative Arts Secondary School in Minnesota, before then enrolling in an online school. Alijai ultimately dropped out to pursue a full-time music career and began rapping over the beats of popular songs by artists such as Dej Loaf, 2Pac and Drake.

Alijai released her first mixtape, Super Sweet 16s, in 2014 on her sixteenth birthday. She then collaborated with Rocky Diamonds on an extended play, titled 3 Days. A second mixtape, In the Meantime, was released a few months later, then her third, Feel·Less, in October that same year.

The following year, she and rapper Shaun Sloan collaborated on a mixtape titled Same Struggle. Different Story. Alijai became close friends with Kehlani the summer before the release of Kehlani’s debut commercial mixtape, You Should Be Here, which peaked at number 36 on the Billboard 200. You Should Be Here granted Alijai media attention due to her lyricism and flow presented on the track. Her next full-length project, Joseph’s Coat, was released late 2015 and featured contributions from Elle Varner. In 2016, she performed at Soundset Music Festival and had opened up for Playboi Carti, Lil Uzi Vert and Rich the Kid.

She released a remix of “Exchange” by Bryson Tiller and “Cold Hearted” by Meek Mill and Jay-Z, along with a music video for her remix of “Cold Hearted.”

In 2017, she released a remix of “Redbone” by Childish Gambino and “Me, Myself and I” by Beyoncé. On September 8, Alijai released her first full-length debut studio album, Growing Pains, in which she covered topics such as dropping out of school and maintaining a relationship with her ex-boyfriend’s mother.

Martin Joseph Grebb (September 2, 1945 – January 1, 2020) was an American keyboardist, guitarist, and saxophonist. A member of The Buckinghams in the late 1960s, Grebb was also a record producer and an arranger, who worked with musicians including Bill Payne, Bonnie Raitt, Eric Clapton, Etta James, and Leon Russell.

In 1966, a local band, The Buckinghams, required the services of a keyboardist, and Marty Grebb was asked to team up with them. Around this time, the band members were introduced to James William Guercio, a former bassist and road manager for Chad & Jeremy who found them a management contract with Ebbins-Guercio Associates. The band went on to have six top-ten national selling singles and three top twenty albums with Marty Grebb for Columbia Records.

After the Buckinghams, Grebb toured with a number of artists, including Leon Russell, Elton John, Muddy Waters, and most notably Bonnie Raitt as a member of her band for 25 years. He was also a touring member of Chicago in 1980 and 1981.

Previous:
EVENTS: Calendar and Bell Ringers for January 2, 2020
Next:
THOUGHTS and PRAYERS: Music Mental Health Statistics: Musicians are People, too!