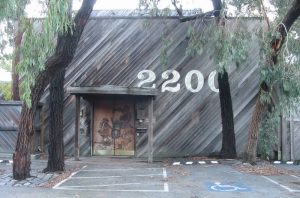 Snapshot of the Record Plant, a.k.a. The Plant, a recording studio in Sausalito, California. Photo shows the front of the building, including the double doors and the number 2200 for the address, 2200 Bridgeway.

From Chris Daniels on Fb, 3/23/18: There are times when we just don’t know how to say goodby. One of the greats is gone today, Kooster McAllister. He was a dear friend, a founder of the Telluride Bluegrass Festival, a great banjo picker, and one of the most honored remote, mixing and recording engineers in the world.

His accolades included a Grammy for “Standing In The Shadows of Motown,” engineering credits on albums from Springsteen to Pavarotti – The Rolling Stones to Prince. For years he was the engineer with his truck (The Record Plant Truck) for ABC’s Good Morning America. But that is just what he did for a living.

He was a great dad, and a dear friend. I ran into him a number of times over the past few years and had dinner with him, Chris M, Sam B, and Lynn B last year in Telluride. He was happy, in love, thrilled to watch his son moving safely into the industry and thrilled to see the Festival that he started with Picker, Fred and others, move into this century healthy, strong and in good hands.

Kooster played the song I wrote on banjo, “Old Man Das” better than I did and we laughed about it at that dinner. I stayed at Kooster’s house down the valley a number of times including one time when I almost lost my toe on an axe he kept at the bottom of his loft ladder. We still laughed about it (though not on that particular day).

He was gentle, wise, wonderfully opinionated (a good thing) and probably the best recording engineer I ever knew. He was funny as hell and he had a heart about the size of a Telluride full moon. He died of cancer near his home in New Jersey – surrounded by family and loving friends.

He was too young – but he packed more life into his time on the planet than anybody I ever knew. Big hugs dear ol’ friend. You gave the world so much incredible music that will live forever. As we used to say at our partings, “I love ya, buddy.” ~ CD