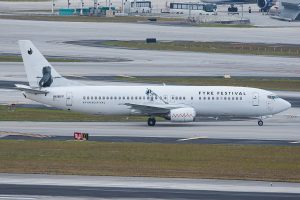 A Boeing 747 with the Fyre Festival branding

Alex Teitz of Fem Music sent us several articles this past couple of weeks that our readers may find very interesting. We recommend that you check them out!

By Andre Wheeler | The rapper Ja Rule was officially dismissed on Monday from a $100m class-action lawsuit filed by Fyre festival attendees, clearing him of any legal wrongdoing.

Ja Rule, whose real name is Jeffrey Atkins, co-founded the festival with Billy McFarland, and repeatedly advertised it to the millions of followers on his social pages.

The New York City southern district judge P Kevin Castel delivered the decision, saying that plaintiffs were unable to prove that Ja Rule’s promotion of the event on his social pages directly led to their ticket purchases.

By Kyle Harris, Westword | Days after Antero Hall at Eck’s Saloon canceled a two-night black-metal music festival after anti-fascist activists blasted the bands for having Nazi ties, promoter Metal DP’s black-metal shindig Divinus Principium — pared down to one day — took place at the Roxy Theatre in Five Points under the name Metal Show.

Activists got word about the move on Saturday afternoon and spent the weekend slamming the Roxy online, accusing the owner and manager of being Nazi sympathizers and fascists.

General manager and talent buyer Travis Ragan, who says he was at home watching The Lion King with his child when he got wind of the hubbub, read a flurry of tweets accusing him and the venue of being in bed with Nazis.

“They started calling me a fascist. I didn’t even know what the word meant,” recalls Ragan. “I had to Google it.”

The venue, owned by Ivan Ovchinnikov, aka horrorcore artist Scum, has been a home for diverse bands but is best known as a Juggalo hub. The Roxy has hosted drag shows, LGBTQ fundraisers and Black Pride events, Ragan says, and Ragan himself promotes hip-hop and reggae.