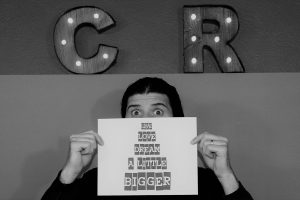 The Very Clever Christopher Ryan 3 (from his Facebook page)

Christopher sent us a link to his new music video for his song “A Little Bigger” – it is VERY funny and so clever! Called “The Quarantine Games”… It will give you some ideas for things to do when you’re bored staying at home and away from the coronavirus!

Chris says: I am working to get 1000 “Subscribers“ on my YouTube channel so I can monetize it. (Currently at 160… started the pandemic with around 20. So, that is progress.) Trying to do a new video on the channel weekly.

Christopher Ryan is a modern songwriter whose live performances demand to be heard. He brings diverse sounds to the stage with his cigar box guitar, djembe, vocal harmonizer, acoustic guitar and live looper.

Christopher’s music has been played on radio stations worldwide. He has performed for the Rocky Mountain Loopfest, the international One Month Festival and been a featured artist on numerous media programs and radio shows. In 2019 he was one of nine residents selected to study with Grammy Award winner Larry Mitchell at the Atlantic Center for the Arts.

Rich sent a notice that his band was playing at The Twisted Ape’s but the notice came too late for us to include it in last week’s newsletter. However, YOU might be interested in this club – either in playing at it or going to a show there.

Come remember 9/11 with the best new bar in Colorado Springs! We support the military, Fire, Police, and all emergency workers!

Have a patch/pin? Come put it on our wall of honor at Twisted Radio Studios!

AND … Our house band is seeking a killer keyboardist to help round out the Sic N’ Twisted house band. Hit us up for details.

Musician & Sound Engineer Paul Stenvig is “De-Hoarding” – Help Him Out

Paul Stenvig: Cleaning out mega stuff. Things have been going well. I have rid myself of my film crane… a storage shed full of 25 years of hoarding metal… all the parts for a trailer… a really cool mouse cage I made….Yesterday I let go of my Mom’s 3 piece bedroom set (really nice) and several lamps and vases. They are coming back for my BBQ grill and a small table. Also 3 custom PA speaker boxes, a pair of stereo speakers, and basket of speaker wires. Previously I gave away the front of a full size tour bus. FREE Dolly to a good home of a video person. 303-823-5141