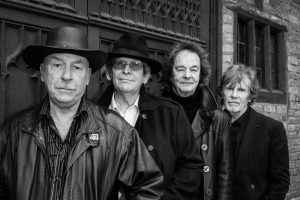 Although the 50th anniversary of Woodstock 1969 has now passed with enough publicity to last until the 100th, let’s not be too quick to forget about 1968—at least musically.

It was a tragic year in many ways with enough assassination and war to fill a decade, but music was another story. It was the year that the Beatles issued the eponymous double record that would be forever dubbed “The White Album” and the Rolling Stones finally found their voice on Beggars Banquet. And a then-unknown British band called Led Zeppelin made its U.S. debut in Denver.

We are a year late for the 50th anniversary of ‘68, but who’s counting? “Something Great From ‘68” will make a worthwhile tour stop at Denver’s Paramount Theater on Saturday, Sept. 20, when Beach Boys founder Brian Wilson and the Zombies mark the year with some of its best music.

The Zombies—now members of the Rock and Roll Hall of Fame—return to Denver to showcase yet another full reading of their classic 1968 song suite Odessey and Oracle.

Wilson will highlight tracks from Friends, an understated Beach Boys 1968 treasure that was lost in the shuffle of the band’s earlier Pet Sounds and aborted Smile album.

Both acts will also perform a cross section of their histories [including the Zombies’ early hits and new music. Wilson will play Beach Boys classics and deep tracks from Pet Sounds and beyond. Former Beach Boys Al Jardine and Blondie Chaplin (“Sail on, Sailor”) are part of Wilson’s touring band].

In the following recent interview, Chris White, the Zombies’ longtime bassist and co-songwriter, talks about the classic Odessey and Oracle album and a new comic-surreal musical about the Zombies’ late-1960s era of hard work, ingenuity and disastrous touring.

Tell us about this tour with Brian Wilson.

We always thought it would be a great idea to work with Brian Wilson. We loved his creativity. It also seems like a magical time to do Odessey and Oracle, and we always loved hearing Pet Sounds. Brian’s keyboard player is Darian Sahanaja, and when we do Odessey and Oracle live, Darian joins us on stage as well. He’s doing two gigs when we’re touring with Brian, so he’s probably getting double the wages of everybody else (laughs). We had never performed the album before when got the original band back together to perform it on the 40th anniversary—and now we’re doing the 50th.

During the mid to late ‘60s, there was such an exciting exchange of influence between the Beach Boys and the Beatles. And the Zombies could not help but be affected when you consider the direct lines between “Rubber Soul,” “Pet Sounds,” “Sgt. Pepper” and “Odessey and Oracle.”

We went into Abbey Road to record Odessey and Oracle just as the Beatles were leaving, having recorded Sgt. Pepper [and “Strawberry Fields Forever”]. In those days, we only recorded on four-track, but the Beatles had pushed the engineers there to bounce four tracks down to another four-track machine, so we could add a few extra harmonies. But by the mere fact that they left the Mellotron there, we managed to include a lot of it on the album. We absolutely wouldn’t have used a Mellotron otherwise. We were given 1,000 pounds—that’s all we had to do a whole album—so we rehearsed the hell out of all the songs [before coming to the studio]. Rod and I wrote all the songs, and the Mellotron changed the whole texture.

Did “Sgt. Pepper” give you the courage to record an album like “Odessey and Oracle”?

Absolutely, and the Beatles opened up America for all English groups. Before the Beatles, there was no interest in English music at all. They were really fantastic at pushing the barriers on music. The Beatles were such giants. It spurred us on. They set the challenge.

The word “odyssey” was famously misspelled in the title, “Odessey and Oracle,” but as fate would have it, no one noticed until it was too late. At the time, it just seemed like a psychedelic thing.

Our friend, Terry Quirk, who designed the cover, later became a teacher teaching teachers. People used to come to him for spelling, but they never let him forget he spelled “odyssey” wrong. We noticed when it came out, but by that time they’d pressed all the covers. We made up a story that it was a cross between “ode” and “odyssey.”

Right after producing the Zombies’ greatest album, the band broke up—ironically because there was not much interest in “Odessey and Oracle” at the time. Then, “Time of the Season” from the album became a huge hit. But by then, singer Colin Blunstone had taken a day job for an insurance company, and you and Rod Argent were on your way to creating a new band called Argent.

Yeah, we got a production deal because we were visiting CBS the day that “Time of the Season” went to No. 1 in Cashbox. But we didn’t want to go back and perform as the Zombies again. Rod and I were the only ones who had any money because we wrote the songs. But the other three had no money. So we had to split the band. It was an economic thing really. Rod and I would have let a lot of people down if we had gone back to the Zombies. And Rod never wants to go back. He’s always trying to create new things, which I totally understand. Funny enough, there were about three or four groups using the name Zombies [after the band failed to reunite to promote “Time of the Season”].

One of those later phony Zombies even found a guy named Hugh Grundy, the same name as the original drummer.

Yes, he played bass in the fake group. Some people we knew went along to interview them. They said, “You used to play drums?” He said, “Yeah, but the boys wanted me upfront on the bass.” And then they said, “Didn’t you used to be 5 foot 10?”

Another fake version included Dusty Hill and Frank Beard, who would eventually form ZZ Top—a band with Texas accents pretending to be the British Zombies.

That’s right (laughs). It’s lovely. Rod always jokes that when the Zombies finish, he’ll do a fake ZZ Top band. There was a lot of crooked management. We were sent to the Philippines by our manager in ’67. We thought we were playing in a hotel foyer. It turned out to be the second biggest astrodome next to Houston. We played to 30,000 people a night for 10 days for 18 pounds each. The manager was getting 10,000 pounds a night. We were threatened. We came back and lost our record deal with Decca. We’d lost our manager. We had no money. That’s when we decided to go do Odessey and Oracle.

You’ve recently written an offbeat musical about that crazy period.

Yes, and we’ve introduced a fantasy element. We bring in a Haitian “zombie” and he gets really pissed off that there were people in London he couldn’t control. He is responsible for the bad spelling of the album and all the things that went wrong in the Philippines. The story is actually true down to the every detail, but bringing in the fantasy element was a great idea.

After the Zombies, you were basically a nonperforming “member” of Argent, right?

I was a producer and writer, yeah. I sang some harmonies with them. There were a lot better bass players, so I didn’t play. I’m a songwriter who happens to play bass. Jim Rodford, who was Rod’s cousin, was a much better bass player than me. We all got on very well.

You wrote “Hold Your Head Up,” Argent’s biggest hit, but you shared the credit with Rod.

Rod had written all the Zombies’ biggest hits, but when we got together he said, “Why don’t we put our joint names on all the songs we write?” I never regretted sharing that with Rod because it was so generous of him to make that offer. When we recorded it, that song was more than six minutes long, and it was a B-side. But when some DJs picked it up, the record company said, “I think we ought to do an edit,” so we cut it down to [just over] three minutes. Then it became a hit after that.

Decades later, the Zombies’ “Odessey and Oracle” is now mentioned in the same sentence with “Pet Sounds” and “Sgt. Pepper.”

That’s a wonderful accolade. It’s wonderful now that the thing is being recognized because we’re old enough to enjoy it and not be swayed by it. We’re all in our seventies. When we’re on stage and all the people are there, it’s like you’re 25 again.

And the Zombies are finally in the Rock and Roll Hall of Fame. When your band starts with Z, you’re always called last, right?

Except ZZ Top comes after us (laughs).

That was a really wonderful feeling. People like Tom Petty and Dave Grohl have cited Odessey and Oracle as one of their influences. That’s helped an enormous amount. Brian May came into one of our interviews and said, “I just had to say how much you influenced Queen.” That was a magical moment after 30 years of nobody knowing who the hell we were. Then, all of a sudden we get all these accolades. It’s a wonderful feeling.

As long as you do what you think is the best, the cream will come to the top of the cup sometime. You just hope it happens before you die. How nice, after 50 years, to be inducted and still like each other. That is a matter of luck. I couldn’t ask for anything more.