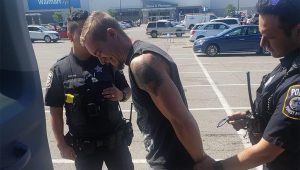 One of the members of TTFA being “arrested” (Image: Metalsucks)

By Tyler Jenke, The Brag | A US metal outfit almost found themselves in a scary situation, having been approached by police following a call of “suspicious characters” hanging out in a Walmart car park.

Back in 2003, there was an interesting story going around the music world when famed post-rock collective Godspeed You! Black Emperor were arrested in the US state of Oklahoma on suspicion of being terrorists.

Coming merely days before the start of the Iraq war, the group’s long-hair, anarchist beliefs, and collection of “anti-government material” resulted in the FBI even doing background checks on the band. After being released from custody, bandleader Efrim Menuck noted that it was “a good thing we’re nice white kids from Canada.”

Fast-forward 16 years, and a similar incident has almost taken place once again, with a heightened state of paranoia following a series of mass-shooting almost seeing a US metal band arrested by local police.

As Metalsucks reports, Kansas metal outfit Torn The Fuck Apart found themselves in an Illinois Walmart parking lot recently, where their shady behaviour of ‘sitting in a van and minding their own business’ clearly raised a few eyebrows.

Following a widely-publicised report that the perpetrator of the recent shooting in Dayton, Ohio was a fan of The Acacia Strain, it seems that the band’s appearance in this parking lot was enough to raise the suspicions of the police, who soon surrounded the band’s vehicle.

“We had been there for about an hour as our drummer was inside the store getting a few things,” frontman Michael Langner told Metalsucks, “and about 15 mins after he went in we heard radio dispatch from behind the van and noticed a cop car pull up behind us.

“Just as quickly we saw three more pull up and surround us.

“After a few minutes of answering questions, the cop said that they were there because they had received multiple calls about a dark van with ‘suspicious characters’ in it. After all IDs were checked they knew that wasn’t the case.”

In the end, the band noted that the police were quite respectful about the whole matter, and even posed for photos with the members, while jokingly telling the band’s drummer the group were under arrest upon his return from the store.

“We don’t blame the cops for doing their jobs; they handled it well,” the band added. “But it was upsetting that we had been profiled for the way a ‘metalhead’ looks. This isn’t something we haven’t encountered before and life goes on.”

While the band are in good spirits about the matter (even holding “a sale on suspicious albums” on their Bandcamp page), it does go to show how paranoid current events in the world have managed to make people.

Read the whole article here:
https://tonedeaf.thebrag.com/police-called-suspicious-metal-band-parking-lot/
Tyler Jenke is the Adelaide-born, Melbourne-based News Director of The Brag Media. You can usually catch him reading up on Hottest 100 statistics, or in the front row of a Bad//Dreems concert.

Attention Walmart shoppers! We are have a sale on suspicious albums today !!! Act quick, the cops are on the way. Lol

Thanks for all the support guys !

And if you’re just finding out about us, welcome to the TTFA family!