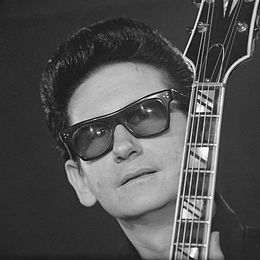 Roy Orbison Jr.‘s family is about to get another new member. The musician and son of late legend Roy Orbison is expecting his second child — a baby boy with wife Asa, whom the couple plan to name Bo Alexander, due on Valentine’s Day.

Considering his family’s roots, it wouldn’t be surprising if Bo ended up taking an interest in music — as his big brother has already done.

“Roy plays guitar every night before bedtime so the sound of the guitar will be familiar and comforting for Bo after he is born,” says Asa, telling PEOPLE the family will be hitting the road starting April 8 for the first-ever hologram tour — “Roy Orbison In Dreams: The Hologram,” where the younger Roy will perform with his father’s hologram.

“And since ‘Oh, Pretty Woman’ is Roy III’s No. 1 favorite song, we all hear it at least three times a day,” she adds of the elder Roy’s instantly recognizable hit. “Bo will recognize his grandfather’s voice as one of the voices he has heard from the outside during the pregnancy.”

Read the whole story and see the beautiful photos – and a couple of videos here:
http://people.com/babies/roy-orbison-jr-wife-asa-pregnant-baby-boy-maternity-pictures/

[Thank you to Alex Teitz, http://www.femmusic.com, for contributing this article.]
Previous:
EVENTS: Calendars and Bell Ringers for January 25, 2017
Next:
BOOK FOR FEBRUARY: The Lazy Person’s Book Club Invites You to Their Debut Live Performance