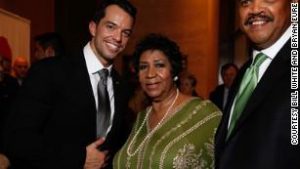 (CNN) ~ Bill White and Bryan Eure weren’t sure how Aretha Franklin would feel about performing as part of their wedding festivities.

After all, there was no artist with deeper roots in the black church than Franklin, who began as a gospel singer under the tutelage of her father Rev. C.L. Franklin, and the church has not historically been known to champion gay rights.

Before Aretha Franklin was a superstar, her father shone on a different stage

The year was 2011 and White, the former president of the Intrepid Sea, Air and Space Museum, and Eure, an insurance executive, were having a high-profile wedding planned as much to draw attention to marriage equality as it was to celebrate their love.

David Boies, the attorney who successfully argued against a California proposition that sought to ban same sex marriages, was the officiant.

“She said ‘David Boies is going to marry you? I could have done that’,” White told CNN. “I thought ‘Oh man! We could have had Aretha Franklin marry us!'”

“She was very passionate that night and very excited to be there,” Eure said. “She looked at gay rights as the next civil rights movement.”

That night at the Four Seasons restaurant in New York City has become an indelible memory for the couple and their 700 guests now that Franklin is gone.

Franklin died earlier this month at the age of 76 after a battle with pancreatic cancer.

White said he and Eure have heard from many of those guests in the wake of her death, because their only connection to Franklin was their wedding.

“Some of those emails would make you cry,” White said.

The event was already set to be a huge deal with the couple’s high-profile circle of friends.

Their guest list read like a “who’s who” in New York City society — politicians, media figures like Barbara Walters and legendary stars, including the actor Joel Grey.

Franklin’s performance was arranged by Clive Davis, who is a longtime friend of both the couple and the singer.

In true Franklin style, she was paid in cash and White said he decided to prank her a bit by holding back $1000.

“She said ‘Bill, I don’t know if you know this but we are short a thousand’,” recalled White, who added that he quickly pulled the money from his pocket. “She laughed and she said ‘Now you know I know how to count!'”

“I would have paid her triple, I was so enthralled by her spirit,” White said.

Franklin was well known for needing to perform in a warm environment, which White said was a challenge with hundreds of people crowded into a standing-room-only event.

“She gets up on stage and says, ‘Hey, Bill, if you love me you’ll turn that air off,'” White recalled.

“We ran a hundred miles a minute to get over there to cut off the air. Not one person complained.”

What followed was a full on concert in which she sang her hits, civil rights songs and finished up with the Dolly Parton song Whitney Houston turned into a record hit, “I Will Always Love You.”

“It was the greatest night of our lives,” Eure said.

His husband said their feelings for Franklin went well beyond the event.

“I didn’t even think of her as a singer, as an entertainer and all that stuff. It’s not even respectful enough,” White said. “She was a real pioneer, she was an extraordinary leader and an example to women and men all around the world with the lesson that if you come from nothing and have good guts, good heart and soul, you can do anything you want in life.”

The feeling was clearly mutual for Franklin.

On October 23rd every year since, the singer would call and leave a message to tell the couple she loved them and to wish them a happy anniversary.

They are glad now that they saved all of those messages.

White [planned] to attend Franklin’s funeral in Detroit on Friday.

Previous:
INTERESTING BITS: Washboards: The Laundry Tool That is Music to the Ears
Next:
REPORTS: Brian May Talks Queen’s Revival: ‘We would never be doing this now if it weren’t for Adam Lambert’ // U2’s Bono Loses Voice During Concert