Home Interesting BitsINTERESTING BITS: The Day the Music Burned: “The vault is on FIRE”!

INTERESTING BITS: The Day the Music Burned: “The vault is on FIRE”! 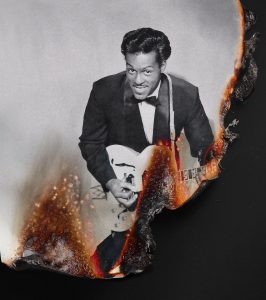 By Jody Rosen, MSN | 1. ‘The Vault Is on Fire’ | The fire that swept across the backlot of Universal Studios Hollywood on Sunday, June 1, 2008, began early that morning, in New England. At 4:43 a.m., a security guard at the movie studio and theme park saw flames rising from a rooftop on the set known as New England Street, a stretch of quaint Colonial-style buildings where small-town scenes were filmed for motion pictures and television shows. That night, maintenance workers had repaired the roof of a building on the set, using blowtorches to heat asphalt shingles. They finished the job at 3 a.m. and, following protocol, kept watch over the site for another hour to ensure that the shingles had cooled. But the roof remained hot, and some 40 minutes after the workers left, one of the hot spots flared up.

The fire moved quickly. It engulfed the backlot’s famous New York City streetscape. It burned two sides of Courthouse Square, a set featured in “Back to the Future.” It spread south to a cavernous shed housing the King Kong Encounter, an animatronic attraction for theme-park visitors. Hundreds of firefighters responded, including Universal Studios’ on-site brigade. But the fire crews were hindered by low water pressure and damaged sprinkler systems and by intense radiant heat gusting between combustible structures.

Eventually the flames reached a 22,320-square-foot warehouse that sat near the King Kong Encounter. The warehouse was nondescript, a hulking edifice of corrugated metal, but it was one of the most important buildings on the 400-acre lot. Its official name was Building 6197. To backlot workers, it was known as the video vault.

Shortly after the fire broke out, a 50-year-old man named Randy Aronson was awakened by a ringing phone at his home in Canyon Country, Calif., about 30 miles north of Universal City, the unincorporated area of the San Fernando Valley where the studio sits. Aronson had worked on the Universal lot for 25 years. His title was senior director of vault operations at Universal Music Group (UMG). In practice, this meant he spent his days overseeing an archive housed in the video vault. The term “video vault” was in fact a misnomer, or a partial misnomer. About two-thirds of the building was used to store videotapes and film reels, a library controlled by Universal Studios’s parent company, NBCUniversal. But Aronson’s domain was a separate space, a fenced-off area of 2,400 square feet in the southwest corner of the building, lined with 18-foot-high storage shelves. It was a sound-recordings library, the repository of some of the most historically significant material owned by UMG, the world’s largest record company.

Aronson let the phone call go to voice mail, but when he listened to the message, he heard sirens screaming in the background and the frantic voice of a colleague: “The vault is on fire.”

Aronson dressed and steered his car to Interstate 5. A few minutes later, the air picked up a harsh scent: the acrid odor of the fire, riding the early-morning breeze into Santa Clarita, roughly 20 miles from the backlot. Aronson sped south. When he turned onto the Hollywood Freeway, he saw clouds of greenish-black smoke pouring into the sky. It was 5:45 a.m. when he gained access to the lot and made his way to the vault.

There, he found an inferno. Fire was blasting out of the building as if shot from giant flamethrowers. The heat was extraordinary. There were at least a dozen fire engines ringing the vault, and as Aronson looked around he noticed one truck whose parking lights seemed to be melting.

The vault lay near Park Lake, a man-made body of water that appeared in the classic B-movie “Creature From the Black Lagoon.” Fire crews began drafting water from the lake. They rained water from the tops of ladders; they doused the building with foam fire retardant. These efforts proved futile. “It was like watching molten lava move through the building,” Aronson remembers. “Just a huge blob of fire that flowed and flowed.”

Before long, firefighters switched tactics, using bulldozers to knock down the burning warehouse and clear away barriers to extinguishing the fire, including the remains of the UMG archive: rows of metal shelving and reels of tape, reduced to heaps of ash and twisted steel. Heavy machinery was still at work dismantling the building as night fell. The job was finished in the early morning of June 2, nearly 24 hours after the first flames appeared.

The fire made news around the world, and the destruction of the video vault featured prominently in the coverage. But nearly all news outlets characterized the vault fire as a close call, in which worst cases were averted. The New York Times reported that “a vault full of video and television images” had burned up, but added that “in no case was the destroyed material the only copy of a work,” a claim attributed to Universal Studios officials. Subsequent articles focused on the fire’s impact on film festivals, which relied on prints from Universal’s library. But journalists moved on from the story, and there has never been a full accounting of film and video losses in the fire.

The Times’s report was typical in another way: It contained no mention of a music archive in the devastated warehouse. The confusion was understandable. Universal Studios Hollywood was a movie backlot, not a record-company headquarters. What’s more, a series of mergers and acquisitions had largely severed the ties between Universal’s film and music businesses. In 2004, Universal Studios was purchased by General Electric and merged with G.E.’s television property, NBC, to become NBCUniversal; UMG was cast under separate management, and in 2006 fell wholly under the ownership of Vivendi, the French media conglomerate. When the fire struck in June 2008, UMG was a rent-paying tenant on NBC Universal’s lot.
> > > > > > > > > >
Among the incinerated Decca masters were recordings by titanic figures in American music: Louis Armstrong, Duke Ellington, Al Jolson, Bing Crosby, Ella Fitzgerald, Judy Garland. The tape masters for Billie Holiday’s Decca catalog were most likely lost in total. The Decca masters also included recordings by such greats as Louis Jordan and His Tympany Five and Patsy Cline.

The fire most likely claimed most of Chuck Berry’s Chess masters and multitrack masters, a body of work that constitutes Berry’s greatest recordings. The destroyed Chess masters encompassed nearly everything else recorded for the label and its subsidiaries, including most of the Chess output of Muddy Waters, Howlin’ Wolf, Willie Dixon, Bo Diddley, Etta James, John Lee Hooker, Buddy Guy and Little Walter. Also very likely lost were master tapes of the first commercially released material by Aretha Franklin, recorded when she was a young teenager performing in the church services of her father, the Rev. C.L. Franklin, who made dozens of albums for Chess and its sublabels.

This is an extensive and historic article. Please read the whole writing. More sections are titled:
2. The Truest Capture
3. An Open Secret
4. Cathedral of Sounds
5. Deep Catalog
6. The Shadow Canon

Jody Rosen is a contributing writer for the magazine. His book about the history of the bicycle will be published in 2020.