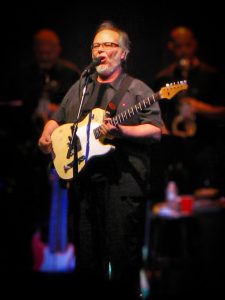 By Jon Blistein, Rolling Stone | Walter Becker’s massive collection of guitars and amplifiers collected $3.3 million at auction over the weekend. Julien’s Auctions in Los Angeles hosted the two-day sale, which featured 600 guitars and 400 amplifiers, plus an assortment of other gear and sound equipment.

According to Billboard, the big ticket items included a 1957 Fender Duo-Sonic guitar featured in the liner photographs of Steely Dan’s Aja ($57,600), a pedal board Becker used at his apartment ($32,000) and a red Sadowsky Telecaster-style guitar nicknamed “Josie” (after the Steely Dan tune), which Becker played on The Late Show in 1995 and throughout his 1996 tour ($24,600). One of the most surprising sales was a 1930s Bruno acoustic guitar decorated with a Hawaiian scene that sold for $28,125, despite being valued between $200 and $400.

The most expensive item of the auction was one of Becker’s favorite guitars to play live, a custom sparkling green Stratocaster-style guitar that he bought in 2011 from the New York-based guitar maker Chihoe Hahn. Becker reportedly paid $3,400 for the instrument and it sold for $68,750.

“Walter Becker was not only an icon in the world of music but he had one of the largest, most diverse collections of guitars, amps and guitars unlike any other musician we have ever worked with,” said Darren Julien, President and CEO of Julien’s Auctions. “It was one of the most solid and fun auctions as the gearheads and fans alike turned out in big numbers to participate in this historic auction. Walter would be proud as his items are going to good homes where they will be treasured, used and respected. As one rock star who phone bid over the weekend put it, ‘These guitars have good karma that I want to capture in my performances because they were played by Walter.’”

One quirk of the auction that may have driven prices up …

Thanks to Chuck Hughes for the lead on this article!