INTERESTING BITS: Wikipedia Featured Article of the Day: About the Song “Touch Me I’m Sick” 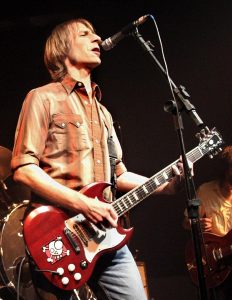 “Touch Me I’m Sick” is a song by the American alternative rock band Mudhoney. It was recorded in March 1988 at Seattle’s Reciprocal Recording studio with producer Jack Endino and lead vocals by Mark Arm (pictured). The song was released as Mudhoney’s debut single by independent record label Sub Pop on August 1, 1988, with “Sweet Young Thing Ain’t Sweet No More” as the B-side. “Touch Me I’m Sick” has darkly humorous lyrics with a sarcastic take on issues including disease and violent sex. When it was first released, the song was a hit on college radio. Its heavily distorted and fuzzy guitars, snarling vocals, blunt bass line and energetic drumming contributed to a dirty sound that influenced many local musicians, and helped develop the nascent Seattle grunge scene. According to AllMusic, “the song’s raw, primal energy made it an instant anthem which still stands as one of [grunge’s] all-time classics”. A staple of Mudhoney’s live shows, it remains the band’s most recognizable song.