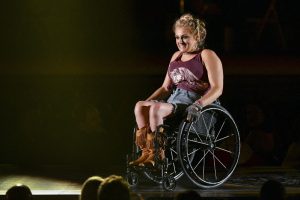 Ali Stroker as “Ado Annie” in the musical “Oklahoma”

The 73rd annual Tony Awards were held on Sunday, June 9th. Here are the highlights of the 2019 Tony Awards ceremony:

Ali Stroker won the award for best featured actress in a musical for her performance in “Oklahoma!,” becoming the first wheelchair user to receive a Tony.

In her acceptance speech, Rachel Chavkin, the director of “Hadestown,” challenged her industry to increase diversity. Bryan Cranston defended “all the real journalists around the world.”

On the red carpet, stars like Billy Porter and Taylor Mac took the opportunity to challenge gender norms.