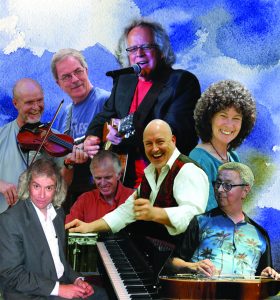 By Peter Jones – Special writer for COMBO | Another great ‘idea’ becomes an album by Colorado’s Jim Ratts and Runaway Express. It all begins with one acoustic guitar and the simple story of a teenager named Quincy.

From there, Celebrate Woodstock evolves into a multi-sensory theater of the mind as Quincy—and his generation—wander into upstate New York on a life-changing coming-of-age journey.

Quincy is not in Kansas anymore. And neither are 400,000 others.

“I’ve got to go to Woodstock,” the boy reasons with his old man, who is skeptical until the quick-on-his-feet teen manages to convince his father that Hendrix and Jefferson Airplane are the Artie Shaw and Dorsey Brothers of today. The wild-eyed kid will soon backpack into three days of peace, love and music at the unlikeliest of venues, a 600-acre-dairy-farm-turned-Aquarian-mecca.

The movie—err cinematic album—called Celebrate Woodstock is the newest conceptual work by Englewood’s Jim Ratts and Runaway Express. The CD marks the 50th anniversary of the iconic Woodstock festival. This time, Ratts’s penchant for ambitious sound collage borders on rock opera as a massive “breakfast in bed,” the infamous traffic jam and other Woodstock touchstones are told in song, often from the standpoint of the audience and a generation lost in space.

“Seventeen bucks for the weekend,” Runaway Express sings, as a sort of ‘60s Greek chorus.

Celebrate Woodstock is less a collection of songs than an interweaving period piece with singer-songwriter Ratts serving as narrator. The segue-filled CD is a medley of natural sound, dialogue, and, of course, the soundtrack of an era — songs like “Goin’ Up the Country,” “Piece of My Heart,” and the Joni Mitchell ode that helped launch the Woodstock mythos.

Although reflective narration and the weight of history are heard throughout Celebrate Woodstock’s 80 minutes, a more personal, less omniscient account is told through the eyes of Quincy. Are the Stones going to show up? What about Dylan? He lives in Woodstock.

Amid those 12 original songs, Runaway Express serves as the house band for a generation “playing” the parts of many Woodstock acts, sometimes less literally — re-inventing the Who’s “My Generation” as a time-traveling look back at the craziness, from the semi-jaded standpoint of today’s aging boomers, calling it “Regeneration.”

The album is not just about Woodstock per se. Antecedents like Jack Kerouac and 1950s rock and roll make cameos too. Ratts, a Buddy Holly super fan, uses the quirky—and oddly well received—performance by Sha Na Na as a clever flashback within a flashback. And when Ratts urges “Come On” to the tribe, he naturally evokes Eddie Cochran as much as Wavy Gravy, whose stage banter [“We must be in heaven, man”] is the basis for a new song called “Motherland.”

As a singer-songwriter, Ratts has an ear for history and larger-than-life ideas, but he also knows how to get personal, as evidenced by such earlier “concept albums” as his double-shot tribute to Holly and this year’s poignant Small Towns, which tells the story of rural America in musical chapters.

Ratts played his own role in music’s post-Woodstock country-rock period as a touring musician in the 1970s. His songs have been recorded by the likes of Sam Bush [the bluegrass chart hit “Howlin’ at the Moon”] and he has played and sung with members of the Nitty Gritty Dirt Band, both John McEuen and Jimmy Ibbotson, yielding an MCA release by Wild Jimbos. Most of Ratts’s work was recorded in his Englewood studio.

Celebrate Woodstock is affecting in its individualized account, but the CD is more than nostalgia as it places rock’s most famous music festival on a kind of timeless and universal level. Most important, Ratts manages to put the enduring idealism of Woodstock in a decidedly contemporary and thought-provoking context, without ever taking the fun out of the music.

How many other potential resources for a term paper can you dance to?

Celebrate Woodstock is a slice of heaven, man.

In this interview, Ratts reflects on his most ambitious “idea” to date.

Did you go to Woodstock?

Curiously enough, I was driving a tractor for my dad that summer. I’d been in college for two years in Lubbock, Texas. I had my hippie friends. But there’s something about being on the farm in Kansas, where you’re not listening to the radio and it just totally escaped me. Life magazine came out with an explosive full issue of pictures, and I like to say I saw myself in the crowd.

There had already been the Monterey Pop Festival and a number of other similar large musical events. What was it about iconic Woodstock that pushed it above the rest?

It’s just a timeline. These other rock festivals were just predecessors. The scene was building. This thing was getting bigger and bigger. At some point, it had to become a magnificent failure. It was destined for implosion or explosion. I don’t know which. Then, right out of the chute, Crosby, Stills and Nash were just all over the radio with “Woodstock,” this amazing and explosive song. What bigger punchline does a festival need to drift into historical significance?

What prompted you to look back at the festival with a full-on theatrical concept album?

It wasn’t the festival itself. The Woodstock Music and Arts Fair was just a platform on which to stage my play, a venue for me to sing about the times. Woodstock is in lower case, and the ‘60s experience for me is in all caps. It was special being a hippie teenager. I had enough friends that I feel like were stardust and golden.

As for doing concepts or collage pieces, I like a narrative presentation that’s theatrical and actually has a storyline that incorporates music and characters and a spirit that I distinctly remember.

“Celebrate Woodstock” seems to beg the question about the impact of the ‘60s generation — and a promise that was not necessarily fulfilled.

The clock is still running on whether it’s fulfilled or not. This will come up with every new generation of strong legs and idealism. Every generation has their chance to step in.

It’s appropriate that Woodstock would be the subject of a concept album, as the late ‘60s were the era of the concept album, a genre that has largely gone the way of the 8-track tape.

Concept albums are archaic — and I love that because I am, too. I’ve always wanted to create thematic collages. I just love the seamless nature of audio continuity. That three-second pause is designed for singles airplay. Still, this CD is infinitely playable on the radio. It’s just that the radio guy has to have his hand on the slider and know when to move it. Ben Fong-Torres, former editor of Rolling Stone, suggests fading track 3, “Yesterday’s Children Collage,” at four minutes for a slightly psychedelic introduction to the festival experience, radio-ready.

Think about it this way, Peter: An idealist makes an imaginary journey to a festival he never attended and he invites all lords and ladies of the Royal Court to join him on a most exquisite trip. I’m talkin’ ‘bout my generation, and yours too!

To order a CD or digital copy of “Celebrate Woodstock” by Jim Ratts and Runaway Express, visit http://www.runawayexpress.com or http://cdbaby.com.