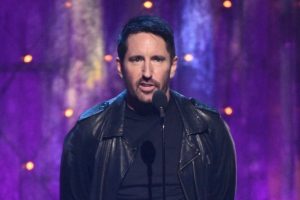 Production credit on “Old Town Road” gets the Nine Inch Nails members a win for Musical Event of the Year. (Photo from the NIN website)

By Jon Freeman, Rolling Stone | When Lil Nas X and Billy Ray Cyrus’ record-breaking “Old Town Road” was presented with the CMA Award for the off-camera category Musical Event of the Year on Wednesday, it was historic for a few reasons. For starters, it marks the first CMA win for Atlanta-based rapper-singer Lil Nas X, as well as the first in 27 years for “Achy Breaky Heart” star Cyrus. Perhaps even more surprising, though, is that the “Old Town Road” win also earns Nine Inch Nails leader Trent Reznor his first CMA Award for production, an honor he shares with his frequent collaborator Atticus Ross and YoungKio.

Call it a happy accident, maybe: “Old Town Road” features a short banjo composition that was lifted from Nine Inch Nails’ “34 Ghosts IV,” from the 2008 album Ghosts I–IV. YoungKio lifted that section and added trap beats, a production that Lil Nas X purchased online for a mere $30. The finished product, including the original and Cyrus remix, went on to become a global smash. For his unwitting role in this success, Reznor admits he was surprised and initially taken aback when he heard the transformation.

“At first, when you hear your stuff turned into something else, it always feels awkward because it’s something that intimately came from you in some way,” Reznor told Rolling Stone in October.

Reznor previously had a big brush with country music back in 2003, when Johnny Cash delivered a stark version of Nine Inch Nails’ “Hurt” for American IV: The Man Comes Around with producer Rick Rubin. American IV went on to claim the CMA Award for Album of the Year in 2003, while “Hurt” picked up Single of the Year and Video of the Year for its Mark Romanek-directed clip — but Reznor’s composition didn’t wind up among the final nominees in the Song of the Year category.

That experience of having a personal song interpreted by a country icon was also strange for Reznor at first.

“You feel a little bit violated, you know?” he said. “And then you get over that, and you realize it has become something else, and the Johnny Cash thing is incredible. It’s very flattering.”

Read the rest of the article at …
https://www.rollingstone.com/music/music-country/trent-reznor-cma-awards-old-town-road-911941/